A News Corp. without newspapers?
Tech

A News Corp. without newspapers?

Rupert Murdoch built his vast fortune selling newspapers, expanding a single daily in his native Australia into a media and entertainment empire that spans the globe. 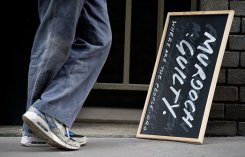 A protestor waits outside the central London home of News Corporation Chief Rupert Murdoch. Murdoch built his vast fortune selling newspapers, expanding a single daily in his native Australia into a media and entertainment empire that spans the globe.

But the phone-hacking scandal in Britain which led to the shock closure of the News of the World is raising the once-unthinkable possibility of a News Corp. without newspapers -- or at least no British dailies.

Within hours of the announcement that News Corp. was abandoning its bid for full control of British satellite TV broadcaster BSkyB, Nomura analyst Michael Nathanson was arguing for a strategic reorientation by the company.

"Perhaps this rebuke will force News Corp to reconsider its ownership of UK newspapers," Nathanson said.

"We hope this is a turning point for the company's strategy and asset allocation as the ownership of highly inconsequential newspaper assets has forced the dropping of a strategically important asset," he said.

Barclays Capital analyst Hale Holden said pulling out of the deal for BSkyB, which owns the rights to English Premier League football, was a "negative" for News Corp. since it "would have been a strong source of reoccurring revenue and free cash flow."

The Wall Street Journal reported Wednesday that the spiraling News of the World phone-hacking scandal has already forced News Corp. to consider selling off its remaining British newspapers.

Citing unnamed sources, the News Corp-owned Journal said News Corp. has explored whether there are any potential buyers for News International, which includes British newspapers the Sun, the Times of London and the Sunday Times.

News Corp.'s other newspaper holdings are in Australia, where Murdoch began after inheriting The Adelaide News from his father, and in the United States, where News Corp. owns the New York Post in addition to the Journal.

The scandal has been confined to Britain so far but it is threatening to spread to the United States, where US senators called on the Justice Department and Securities and Exchange Commission on Wednesday to open an investigation.

In a joint letter, senators Barbara Boxer and Jay Rockefeller said the "reported allegations against News Corporation are very serious, indicate a pattern of illegal activity, and involve thousands of potential victims."

They urged the Justice Department and SEC to look into whether News Corp., which is incorporated in the United States, violated US law by allegedly bribing police to gain access to private telephone information and records.

"Additionally, there are troubling reports that News Corporation may have illegally accessed phone records of victims of the 9/11 attacks," they said.

The Justice Department declined to comment on Wednesday with a spokeswoman telling AFP: "We don't typically confirm or deny investigations even if one were to happen."

With his newspapers under growing scrutiny, financial and media analysts are speculating about whether Murdoch might be compelled to cut them loose in order to protect his other, more lucrative interests such as Fox Television and 20th Century Fox.

Morningstar analyst Michael Corty said News Corp. makes around three-fourths of its profits from its cable television networks and movie businesses and that newspapers contribute little to the bottom line.

"If push comes to shove the entertainment businesses are much more important to the company these days," Corty said.

"Although the news organizations in the UK have put a black eye on the company it doesn't really impact how these other businesses are run and how profitable they are," he said.

"So I wonder whether News Corp. will have to get out of the news business to save the business of News Corp." he asked.

"You might say that Rupert would have his newspapers pried from his dead hands and that might well be the case," Jarvis continued. "But know well that he is not loyal to media.

"When he had a choice of owning TV stations or newspapers in Boston and Chicago, there went the papers," he said. "So I could see stockholders and managers and heirs pressure Murdoch to get rid of his news properties."