Online financial transactions giant PayPal on Wednesday showed off a mini-program that lets people exchange money by touching together a pair of Google smartphones. 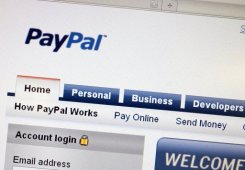 Online financial transactions giant PayPal on Wednesday showed off a mini-program that lets people exchange money by touching together a pair of Google smartphones.

"You have to use it to believe it, but with a simple 'buzz' you'll be able to transact with friends, family, colleagues and employees easier than ever before," PayPal senior mobile director Laura Chambers said in a blog post.

"Sometimes the most obvious solutions are the most elegant," she added.

The feature is to be available by September and will initially work only with Nexus S model smartphones, according to Chambers.

Each phone involved in a transaction will need to have the PayPal program, which requires a PIN number to be entered to authorize exchanges.

Google in May began field testing an application that turns Nexus S smartphones into electronic wallets.

"Google Wallet" will eventually be expanded to other phones equipped with NFC technology.

NFC technology uses short-range, high frequency wireless to enable the encrypted exchange of information between devices at a short distance.

NFC chips in Nexus S smartphones let users who have entered credit card details to "tap-and-pay" for purchases at checkout registers equipped with the PayPass system from CitiMasterCard.

Within hours of the unveiling of "Google Wallet," eBay and PayPal filed a lawsuit charging the Internet giant tapped into the online financial transaction service's know-how for the mobile payments project.

Google has rejected the claim and vowed to fight the lawsuit.