Regimes that choke off citizens' access to the Internet to try to quash pro-democracy movements in the Arab world are running scared and fighting a losing battle, a US diplomat said Wednesday. 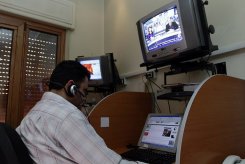 A journalist works at his office in Damascus in 2010. Regimes that choke off citizens' access to the Internet to try to quash pro-democracy movements in the Arab world are running scared and fighting a losing battle, a US diplomat said Wednesday.

"These are the acts of governments that fear their own people," Assistant Secretary of State for Human Rights Michael Posner said at a forum that looked at the key role new technologies have played in the drive for democracy in the Arab world.

"In cracking down on the Internet, they expose their own lack of legitimacy," Posner said, using language similar to that used in recent days by the White House and Secretary of State Hillary Clinton to describe President Bashar al-Assad of Syria.

Syrian security forces have cracked down violently on pro-democracy demonstrators, killing more than 1,300 civilians, activists have said on their Facebook page, which is one of the pro-democracy movement's main links to the outside world.

The Assad regime has barred foreign journalists from entering Syria to report on the four-month-old uprising and last month choked off the Internet.

But anti-Assad activists have reported regularly to the outside world via Facebook and YouTube about the situation in Syria.

"Free speech... is harder than ever to suppress in the digital age," and regimes that target new technology as they try to cling to power are fighting the wrong fight, Posner said.

"After all, Facebook does not foment dissent; people do," he told a packed meeting room at the New America Foundation in Washington.

"Don't shoot the instant messenger. Instead, address the underlying grievances of the people -- the corruption, the abuse of power, the environmental degradation, the lack of economic and political opportunity, the daily affronts to dignity by indifferent authorities," Posner said.

"It is this quest for dignity that has prompted so many young people to walk away from their keyboards and into the streets to demand their chance to build a better future," he said.