The OpenAI website ChatGPT about page on laptop computer arranged in the Brooklyn borough of New York, the United States, on Jan 12, 2023. (Photo: Bloomberg)

PARIS: The hottest start-up in Silicon Valley right now is OpenAI, the Microsoft-backed developer of ChatGPT, a much-hyped chatbot that can write a poem, college essay or even a line of software code.

Tesla tycoon Elon Musk was an early investor in OpenAI, and Microsoft is reported to be in talks to up an initial investment of US$1 billion to $10 billion in a goal to challenge Google's world-dominating search engine.

If agreed, the cash injection by the Windows-maker would value OpenAI at a whopping $29 billion, making it a rare tech-world success when major players such as Amazon, Meta and Twitter are cutting costs and laying off staff.

"Microsoft is clearly being aggressive on this front and not going to be left behind on what could be a potential game-changing AI investment," said analyst Dan Ives of Wedbush Securities.

Before the release of ChatGPT, OpenAI had wowed tech geeks with Dall-E 2, a software that creates digital images with a simple instruction.

Microsoft, which makes no secret of its AI ambitions, has integrated Dall-E 2 into several of its applications and now, according to a report in Bloomberg, the tech giant wants to graft ChatGPT to its Bing search engine to take on Google.

Since ChatGPT was introduced in November, the prowess of this chatbot has aroused the curiosity and fascination of internet users.

Related: Did a fourth grader write this, or chatbot?

It is capable of formulating detailed and human-like answers on a wide range of subjects in a few seconds, raising fears that it is vulnerable to misuse by school cheats or for disinformation.

The dizzying success is due in part to OpenAI's clever marketing strategy in which it made its research accessible to non-experts, said AI specialist Robb Wilson, founder of OneReach.ai, a software company.

"Having this technology available to technologists was one thing. Offering it in a chat user interface and allowing non-developers to start playing with it ignited a conversation," he said.

Founded in late 2015, OpenAI is led by Sam Altman, a 37-year-old entrepreneur and former president of start-up incubator Y Combinator.

The company has counted on the financial support of prestigious contributors from the start, including LinkedIn co-founder Reid Hoffman, investor Peter Thiel and Musk. 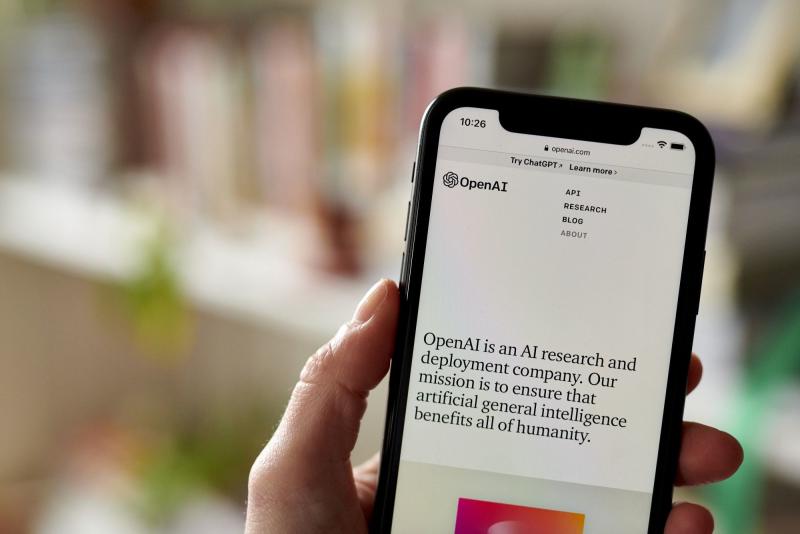 The OpenAI website on a smartphone arranged in the Brooklyn borough of New York on Thursday. (Photo: Bloomberg)

The multi-billionaire served on OpenAI's board until 2018, but left to focus on Tesla, the electric vehicle company.

The start-up also relies on a team of computer scientists and researchers led by Ilya Sutskever, a former Google executive who specializes in machine learning.

OpenAI, which did not respond to AFP's inquiries, had about 200 employees by 2021, according to a query made directly on ChatGPT.

For now, despite the excitement generated by ChatGPT, the company has yet to find a path to financial independence.

Founded as a non-profit, the start-up became a "capped for-profit" company in 2019 to attract more investors and this week co-founder Greg Brockman said that a paid version of ChatGPT was in the works.

The search for funding seems necessary for a company with exorbitant expenses.

In a Twitter exchange with Musk in early December, Altman acknowledged that each conversation on ChatGPT costs OpenAI several US cents.

According to estimates by Tom Goldstein, an associate professor in the University of Maryland's computer science department, the company is shelling out $100,000 a day for its bot, or about $3 million a month.

Partnering with Microsoft, which provides the start-up with its remote computing services, could cut costs, but "either way, it's not cheap," Goldstein said.

"Some say it's wasteful to pour these kinds of resources... into a demo," he added.