International golf stars, spectators and media at the World Cup on the southern Chinese island of Hainan are enjoying uncensored Internet access denied to 1.3 billion Chinese. 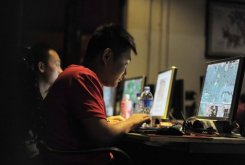 Customers are seen in an internet cafe in Beijing in May 2011. International golf stars, spectators and media at the World Cup on the southern Chinese island of Hainan are enjoying uncensored Internet access denied to 1.3 billion Chinese.

China's communist leaders maintain strict control over what the country's huge online population can see, blocking sensitive content as part of a vast censorship system known as the Great Firewall.

But the Hong Kong brothers who own the five-star Mission Hills golf complex in Hainan have used their close ties with Beijing to guarantee unprecedented open service during the November 23-27 event.

"We just make the free will of communication and the Internet accessible and easy for everyone," one of the two brothers, Tenniel Chu, told AFP.

"It is only available in the resort and it is up to the preference and options of the guests if they choose to use it or not."

The Chu brothers -- sons of the late "father of Chinese golf", industry tycoon David Chu -- have been granted a permit to bypass restrictions and link up to a server in Hong Kong.

And they have succeeded where the International Olympic Committee failed -- such web freedom was demanded by the IOC but denied during the 2008 Beijing Games.

Some 300 Chinese journalists attending the golfing spectacle and those fans holding one of the 120,000 tickets sold for the event are also able to have a peep at the outside online world.

They can freely log on to banned sites which openly criticise the Chinese government's controversial policies on human rights, Tibetan independence and religion.

"It is quite extraordinary that the World Cup organisers are providing a privilege denied to 1.3 billion Chinese," said London's Daily Telegraph sports journalist Oliver Brown.

"The concern is that many of the players, already highly pampered and insulated from the real China inside their five-star resort, will just assume that this kind of open access is the norm across the country."

TOKYO - Japan on Thursday marks 75 years since the world's first atomic bomb attack, with the coronavirus pandemic forcing a scaling back of ceremonies to commemorate the victims.

BEIRUT - For at least six years, hundreds of tonnes of ammonium nitrate, which Lebanese authorities say caused Tuesday's massive blast, were negligently stored in a Beirut port warehouse, waiting for disaster to strike.