US authorities have shut down a number of websites in the latest crackdown on online trafficking in counterfeit goods. 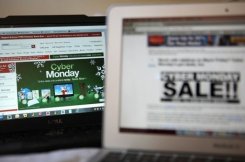 Ads seen for Cyber Monday sales are displayed on laptop computers in 2010 in San Anselmo, California. Ahead of Cyber Monday, US authorities have shut down a number of websites in the latest crackdown on online trafficking in counterfeit goods.

Torrent Freak, a website about the popular BitTorrent file-sharing protocol, said Friday that more than 130 domain names had been seized in an operation it described as the largest yet.

US Immigration and Customs Enforcement spokeswoman Gillian Christensen declined to specify the number of domain names seized but told AFP "these seizures are a part of an ongoing law enforcement operation."

"No further details are available at this time," Christensen said.

Torrent Freak published a list of 131 domain names which it said had been seized in the past 24 hours.

A visitor to the sites is met with a message reading: "This domain name has been seized by ICE -- Homeland Security Investigations, pursuant to a seizure warrant issued by a United States District Court."

It informs visitors that copyright infringement is a federal crime carrying a penalty of five years in prison and a $250,000 fine, while trafficking in counterfeit goods carries a 10-year sentence and a $2 million dollar fine.

The seizure of the websites, part of a campaign known as "Operation In Our Sites," comes just a few days ahead of Cyber Monday, the busiest online shopping day of the year in the United States.

Many of the sites whose domain names were seized appeared to be offering jerseys or other apparel from professional US sports teams.

Pending legislation in the House of Representatives and Senate would give US authorities even more tools to crack down on "rogue" websites accused of piracy of movies, television shows and music and the sale of counterfeit goods.

But they have come under fire from digital rights groups and Internet heavyweights such as Facebook, Google, Twitter and Yahoo! who say they raise censorship concerns and threaten the very architecture of the Web.