A video that seems to show Vladimir Putin going on trial but is in fact a cleverly-edited montage became an Internet hit in Russia on Wednesday ahead of presidential polls with two million views. 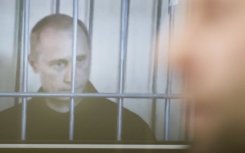 A man walks past a computer monitor displaying a web page with a YouTube video depicting Russia's Prime Minister Vladimir Putin sitting in a defendant's cage on Wednesday. The video -- which seems to show Vladimir Putin going on trial but is in fact a cleverly-edited collage -- became an Internet hit in Russia ahead of presidential polls, scoring two million views.

The minute-long video appears on first glance to show a packed courtroom with Vladimir Putin standing in the cage-like enclosure for defendants, with his head bowed, facing trial on charges of theft and terrorism.

But in fact the footage is a neat collage of shots from the trial of Putin's arch foe, toppled oil tycoon Mikhail Khodorkovsky, with the premier's face superimposed on Khodorkovsky's much taller frame.

The video -- which has garnered almost two million views on YouTube -- has gone viral just over two weeks ahead of March 4 presidential elections where Putin is seeking a historic third Kremlin term in the face of protests.

"The former prime minister was brought to the Khamovnichesky court about half-an-hour ago" says the voice-over, which is based on state television coverage of the second Khodorkovsky trial.

Khodorkovsky was jailed for tax evasion and then convicted of fraud in a second trial in a Moscow court in late 2010. He is set to stay in jail until 2016.

Besides fraud, theft, and overstepping his powers, Putin is also accused of being involved in "organising an act of terrorism" intended to frighten the population, the voice-over says.

The video clip uploaded to YouTube on Monday advertises a 2002 documentary about a series of apartment block bombings in 1999, called "The Assassination of Russia," the company that posted it told AFP.

Vadim Korovin, the director of Moscow-based Lancelot Video distributors, said the clip was intended to publicise a cinema run and DVD release for the documentary, but that the culture ministry this month refused to license it.

"I was expecting less (hits)," Korovin said of the video condemning Putin.

"Many people would really prefer to see him in jail."

The film is based on a book by Alexander Litvinenko, a former Russian security officer. It alleges security services orchestrated deadly bombings in order to help Putin secure his grip on power by sending troops into Chechnya.

Litvinenko, who fled to London before making his allegations public, was poisoned by highly radioactive polonium and died in 2006. The investigation of his death is ongoing, with Russia refusing to extradite the chief suspect.

The film was made by French producers and partly financed by Boris Berezovsky, a Russian oligarch who is harshly critical of the Kremlin and has been granted asylum in Britain.

The video can be seen .