A Bangladeshi student faces sedition charges after he allegedly posted comments on Facebook linking the nation's premier with the disappearance of an opposition leader, police said Sunday. 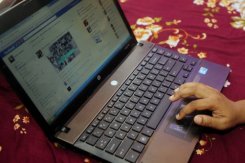 A Bangladeshi logs onto social networking website Facebook on a laptop in Dhaka in May 2012. A Bangladeshi student faces sedition charges after he allegedly posted comments on Facebook linking the nation's premier with the disappearance of an opposition leader.

"Some students became angry after they saw his remarks on Facebook where he said opposition leader Ilias Ali had no chance for freedom because he was caught by Sheikh Hasina," Trishal police chief Firoz Talukdar told AFP.

Ali, a regional head of opposition Bangladesh Nationalist Party (BNP), has been missing since mid-April. The BNP has accused state security forces over the disappearance -- a charge denied by the government and the forces.

"He wrote that Ali would have been freed had he been caught by a jungle tiger. But this jungle tiger is Sheikh Hasina," Talukdar said, adding that if found guilty under sedition charges Molla could face a maximum life sentence.

Talukdar said police had sought the home ministry's permission to charge the 21-year-old English literature student. "We've completed our investigation and found that his Facebook remarks are seditious," he said.

Molla is the second student to be arrested over alleged postings on Facebook this year. In January police detained Al Nayeem Jubaer, 19, from his village west of Dhaka, for posting obscene remarks about Hasina's father on the social networking site.

Also that month a 29-year-old Bangladeshi was sentenced in absentia to six months in jail after posting a Facebook message that appeared to wish for the prime minister to die in a car accident.

Ruhul Khandaker, who has been studying in Australia since 2009, will also be prosecuted for sedition and the courts have asked the foreign ministry to bring him back to the country.