A video of a five-year-old Hong Kong boy playing the piano is taking the web by storm. 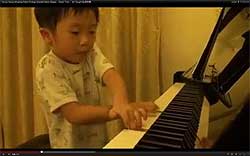 In the video uploaded to YouTube by his father, the prodigy, Tsung Tsung, performed two songs, one of which is English pianist Eric Thiman’s “Flood Time.”

The video was uploaded in February this year and has garnered almost 1.5 million hits as of this week.

The boy’s performance has won him many fans, including "Simpleguy sg," who said “his playing posture looks like some concert pianist and quite old school,” while another admirer, "gizy87," said the boy “has a great future," and user "Albert Nguyen" wonders, “I want to know his tutor; training must have started in the womb.”

YouTube has previously showcased the talents of other musical child prodigies, including a blind five-year-old pianist from South Korea who stunned the music world after a video of her performance surfaced on the channel. Yoo Ye-eun, who was born blind, has reportedly never had a formal piano lesson.

Earlier this year, there was also six-year-old American Ethan Walmark, who attracted the attention of the media when a video of his rendition of Billy Joel’s "Piano Man" went online, with the video clip receiving up to 1.3 million views.