The 3G spectrum auction was carried out under the Frequency Allocation Act of 2010, not the e-auction rules cited by some critics, National Broadcasting and Telecommunications Commission (NBTC) member Suthipol Thaweechaikarn said on Friday.

Article 45 of the law clearly stipulates that the auction must be held in line with the conditions, regulations and timeframe set by the NBTC, he said.

Mr Suthipol insisted that the NBTC would not revoke the auction even though the e-auction committee at the Ministry of Finance had sent a letter to the commission, warning that the auction might have violated the law.

The auction outcome could not be revoked as the NBTC could well face lawsuits as a consequence, he added.

"The 3G spectrum auction is something new and the society might have some questions about it," Mr Suthipol said.

"I insist that there was no political interference in the bidding. NBTC members work with pure hearts and we have finally suceeded," Mr Suthipol said, adding that he was ready to clarify the 3G auction at any stage. 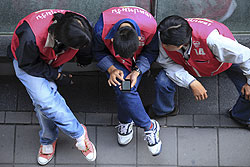 He said society was under the misapprehension that the NBTC had cut the starting price for bidding from a figure 6.44 billion baht proposed by an academic at Chulalongkorn University to 4.5 billion baht, causing 17 billion baht in damage to the country.

The e-auction committee at the Finance Ministry has already sent a letter to the NBTC warning that the 3G spectrum auction might have violated the law.

Supa Piyajitti, the committee chair and deputy permanent secretary for finance, said the 3G auction could violate the Price Collusion Act of 2009.

Ms Supa admitted that her panel has no authority to order the NBTC to do anything but it can warn the NBTC over the controversial auction.

She said her panel considered that this auction had caused damage to the country because the set starting price of the bidding was lower than it should have been.

A study by Chulalongkorn University had suggested that the starting price should be at least six billion baht per slot, but the NBTC had set it at only 4.5 billion baht, she added.

As a result, only 41.62 billion baht proceeds from the auction will be sent to the Ministry of Finance, which is hard to accept, said Ms Supa.

In addition, the number of licences allowed was the same as number of bidders, which would not encourage the bidders to offer higher prices and this was not in line with the e-auction rules, she said.

What should have been done was to offer fewer licences than there were bidders, she added.

"In Germany, the 3G spectrum licence auction price was set at 50 billion baht. We got much less than that and therefore it is not easy to accept the auction outcome," she said.