The government aims to call for bidding early next year for the civil work on the four planned high-speed trains so the first route can be operational by early 2019, says the Office of Transport and Traffic Policy and Planning. 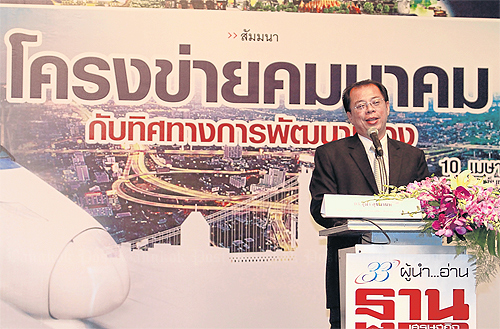 ‘‘The government wants to see metropolitan areas established in each region with highspeed trains attracting people to move outside the capital,’’ says Mr Chula. THANARAK KHOONTON

Director-general Chula Sukmanop said a study is under way for potential routes. The study on the northern route, which will run from Bangkok to Phitsanulok for the first phase, should be completed in the next two months, followed by the northeastern route to Nakhon Ratchasima and the southern one to Hua Hin.

The eastern route is slated to run to Pattaya and extend to Rayong in later phases.

Planned construction will be discussed during a public hearing, and an Environmental Impact Assessment (EIA) will need to be attained, he added.

By September or November, interested international train suppliers will be invited to present their technology. The government is likely to pick only one system for all four routes, said Mr Chula.

Companies from Japan, Korea, China, France and Spain are keen to supply trains for this project, he said.

"We target open bidding for civil works early next year. The first high-speed train line will be operational in late 2018 or early 2019," he said.

The government will be responsible for the cost of civil works, he added. For instance, the planned northern route to Chiang Mai in the extension phase is projected to cost 397 billion baht for a distance of 730 kilometres, but it could be shortened to less than 700 km depending on the route. Five routes are being studied.

About 40% of the government's 2-trillion-baht infrastructure programme planned for the next seven years is allocated for high-speed trains, which will run at a speed of 250 km per hour.

"If the civil work is not taken into account, the high-speed trains will be able to break even by offering competitive fares with low-cost carriers," said Mr Chula.

Under current estimates, the high-speed trains will cost 2.50 baht per km to operate. Low-cost carriers cost 2.40 baht per km now, and the price will certainly rise in five years, he said.

"In addition to moving people, the real economic benefits of high-speed trains are decentralisation and developing new large cities. The government wants to see metropolitan areas established in each region with high-speed trains attracting people to move outside the capital," said Mr Chula.