Deezer aims to enter US market in 2014
Tech

Deezer aims to enter US market in 2014

Online music streaming service Deezer aims to expand to the United States next year, one of the last remaining untapped markets for the French pioneer of legal music services, the company's co-founder said Wednesday. 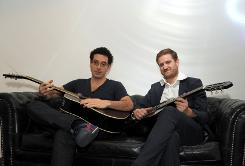 Deezer General Manager for France Simon Baldeyrou (R) poses with Deezer co-founder Daniel Marhely during a press conference to present the evolutions of the website, in Paris on November 6, 2013

A date for the launch has not yet been set, "but 2014 will be an American year for us."

The company which offers listeners in 180 countries a catalogue of over 30 million songs, offers a limited free service supported by advertisements, but small monthly fees gives ad-free access and on mobile devices.

With its main competitors -- Spotify, Rdio, Pandora Media and Rhapsody -- present in the US market, with Apple starting a streaming radio service and Google's YouTube also reportedly looking to launch a paid music service, Marhely acknowledged it was a handicap for Deezer to be absent.

"The big partners, the media brands come from there. You have to be there to exist," he told AFP.

While competition is intensifying in the sector, "not all the cards have been dealt," said Marhely.

Despite raising money for expansion last year, he said Deezer was not looking at going into the US market alone and would seek a partner, like a mobile telephone operator as it has done in other countries and which has allowed it to amass 5 million paying subscribers.

Marhely did not rule out Deezer partnering with a firm outside of the telecom sector, but he denied "rumours" of Microsoft snapping up his company.

With streaming services offering pretty much the same catalogue of music at similar prices, Marhely said Deezer may try to position itself differently on the US market to differentiate itself from competitors.

Deezer will also seek to attract US subscribers with the quality of its service which recommends music to listeners, using computer algorithms and a team of 50 music experts.

While present in 180 countries, the company decided six months ago to focus essentially on five countries: France where it is in the lead, plus Brazil, Mexico, Britain and Germany.

"To be everywhere, but small, that doesn't have an impact," said Marhely.

SURAT THANI: Two tourists have been rescued after losing their way during a jungle trip in Khao Sok National Park in Phanom district on Wednesday.

Innovating nonstop, together for a better green digital life