Pay-TV operator TrueVisions expects the Thai Premier League (TPL) will be a new tool to help increase its subscriber numbers in the mid-tier and mass markets. 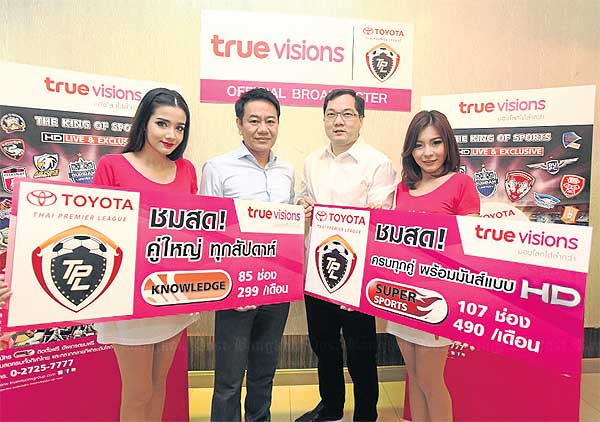 Attaphonn na Bangxang, chief programming and content officer, said its True Knowledge package subscribers can view six TPL football games a week, while viewers with Super Sport or other premium packages can view all 380 games in a season.

The TPL will be broadcast on True Sport 2, True Sport 6, True 10 and True Sport HD 2 as well as its mobile app, TV Anywhere.

According to its survey, such subscribers enjoy the TPL and other local sports including badminton, snooker, volleyball, golf and muay Thai.

Moreover, TrueVisions has launched a top-up service for viewers. Subscribers can view True Knowledge for six months for only 1,200 baht. After six months, they can cancel their contracts without any charge.

The top-up package is another customised marketing tool to draw new subscribers. The strategy has been successful in Hong Kong and Malaysia.

The mid-tier and mass markets will be TrueVisions’ key areas to generate revenue apart from its existing premium subscribers.

Its 13 million subscribers who have TrueVisions set-top boxes can view two TPL games a week for free.

Mr Sueksit said True Move H’s mobile subscribers can view TPL games via its website store truevisions.tv for a charge of 50 baht a week. Football fans are able to view matches of their favourite clubs for a fee of 590 baht per tournament.