An investigation into the case of a man electrocuted in his sleep while holding an iPhone4 plugged into a wall outlet has concluded the charger he used was a fake and shorted out, according to the National Broadcasting and Telecommunication Commission (NBTC). 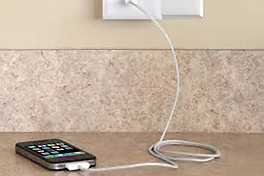 Investigators reported severe burns were found on Pisit’s hand that was holding the iPhone and on his chest.

The NBTC requested Klaeng police station to release the mobile phone for investigation.

NBTC secretary-general ThakornTantasit said a representative from Apple Inc and expert from Expoenent Inc had examined the mobile phone and charger on Jan 10.

It was determined the charger was not produced by Apple Inc and that it was not properly shielded or grounded. The cable was also substandard.

However, the mobile phone was genuine and manufactured in China under contract and was working normally.

Mr Thakorn said Pisit’s death was the result of a defection of the adapter and the cable.

He said the incident was the lesson for all mobile phone users that they should buy only products approved by the industrial standards agency. Users should also follow instructions to ensure safety.

Pisit was not the first person to die while using an iPhone. In July 2013, a Chinese woman died while answering her IPhone 5, which was also charging the battery.

Two hunger strikers were granted bail on Tuesday on grounds that their health was in serious danger, but the application of a third was rejected.

Rescuers in Turkey and Syria brave frigid weather, aftershocks and collapsing buildings as they dug for survivors as quake death toll tops 5,000.