Exciting new digital television technologies will be basking in the spotlight at this month's Commart NextGen — the country's biggest IT exhibition — which runs from June 19-22 at Queen Sirikit National Convention Center, says the event organiser. 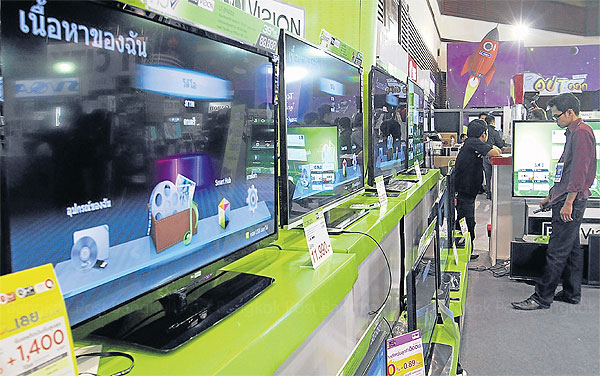 Up to one-third of the total exhibition space will be set aside for digital TV sets, set-top boxes and digital TV operators, said Pornchai Jantarasupasang, director of Arip Plc, the organiser of Commart NextGen.

The digital technology space hopes to be the focus of attention, particularly of those looking to purchase a digital TV or a set-top box to watch digital TV.

The sector also hopes to offset its worst-ever drop in sales this year due to prolonged political strife.

IDC Thailand, a global technology research firm, maintained its gloomy forecast that the local computer market will see a contraction of 20% to 2.4 million units this year, equal to last year's figure.

The research firm also has no plans to revise down its latest forecast for information and communication technology spending growth of 5.5% to US$25.3 billion this year.

The local IT market has already reached its worst level. Most companies have closed down their non-profitable IT stores in recent months in order to survive the sluggish economy and poor consumer confidence.

Mr Pornchai said Arip will spend 5 million baht promoting the event online. Lucky draws will be offered to attract visitors and boost spending. "This is the highest marketing budget we've ever spent," he said.

The company expects sales of only 2 billion baht for this time, down from 2.7 billion baht recorded in the same period last year, he said.

However, he said his company has scaled down the exhibition space by 20% this year due to the unfavourable economic conditions.

The company has added new digital technology booths to its space this year in an effort to increase sales and attract more visitors.

He said sales of digital TV sets will contribute 10% of total transaction value at the event this year.

Prices of digital TV sets have declined significantly with an average of 12,000 baht for a 32-inch screen set.

Given the upcoming Fifa World Cup games, Mr Pornchai said digital TV sets are likely to be the best-selling product at this year's event.

Smart wearable devices will likely be a new product category at the event.

JAKARTA: Indonesia summoned Britain's ambassador on Monday to explain the raising of a lesbian, gay, bisexual and transgender (LGBT) flag at its embassy, and urged foreign missions to respect local "sensitivities" following a backlash among conservatives.

The wreckage of a $5 trillion rout in emerging markets is starting to look like a buying opportunity to some intrepid investors.