Norway's telecom giant Telenor has issued an apology for saying the National Broadcasting and Telecommunications Commission (NBTC) had asked its Thai subsidiary, DTAC, to block access to Facebook. 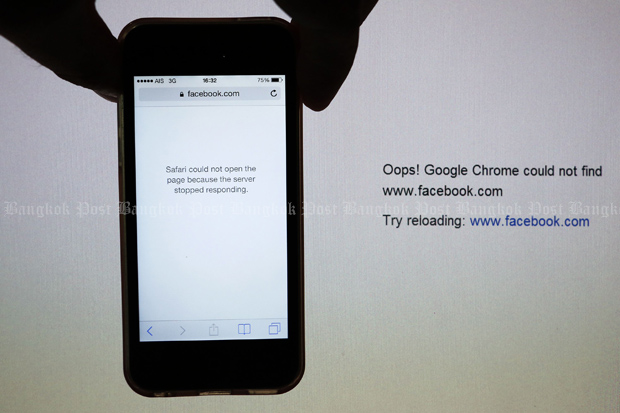 A mobile phone is held in front of a computer screen with both browsers unable to connect to Facebook via local providers in Bangkok on May 28, 2014. (Reuters photo)

Telenor, DTAC's major shareholder, last week said DTAC had been notified by the NBTC on May 28 that it must temporarily restrict access to Facebook, affecting DTAC’s 10 million Facebook-using customers for about 45 minutes. The regulator condemned the company and said the Facebook blackout was due to technical glitches and not purposely blocked.

In a statement released on Sunday, Telenor Group said the information related to the Facebook outage on May 28 in which it released to both international and Thai media “damaged the public image of the NBTC and the National Council for Peace and Order (NCPO), which regulate the telecommunication industry and oversee the security of the nation as a whole, respectively.

“The executives of Telenor Group and Total Access Communication (DTAC) regret what happened.”

It said executives of Telenor and DTAC are fully aware that Thailand is currently under the administration of the NCPO and the country requires unity among its people.

“Both Telenor Group and DTAC fully recognize the need for this unity as well as heightened sensitivity, and we are deeply sorry for the effects.

“The executives of Telenor Group and DTAC would like to take this opportunity to apologise to the NBTC and NCPO,” the statement said. “ We will continue to strengthen our dialogue with the people of Thailand for the betterment of the country. We understand that, moving forward, we all must contribute to securing a better environment.”