Electric car-makers Nissan and BMW are keen to collaborate with rival Tesla after the US company agreed to share its patents with competitors, the Financial Times reported on Monday. 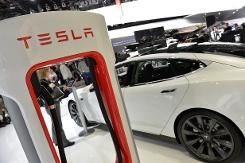 File photo shows the Tesla P85+ all-electric car and its charging station at the North American International Auto Show in Detroit on January 14, 2014

"It is obviously clear that everyone would benefit if there was a far more simple way for everyone to charge their cars," the financial daily quoted an unnamed executive as saying.

The world's biggest electric-car manufacturer, Nissan, along with rivals BMW and Tesla, together account for about 80 percent of the world's battery-run electric car sales, the newspaper said.

A spokesman for Germany's BMW told AFP that executives had met with Telsa for discussions, but declined to give further details.

"We do not comment on media speculation. Both companies are interested in promoting the topic of electric vehicles in the world and contributing to the success of this technology," he said.

Nissan declined to comment on the talks, with a spokesman for the group in Tokyo saying simply it would "welcomes any initiative to boost the number of electric vehicles".

Tesla last week took the rare step of agreeing to share its patents in the hope of increasing global production of electric cars.

Growth in the embryonic industry has been held back as electric cars are often more expensive than vehicles that run on fossil fuels, along with a lack of charging stations and any industry standards for the technology.

Thailand’s employment market is facing myriad risks this year, with widespread drought, poor exports, the delay of the 2020 fiscal budget and the highly contagious coronavirus outbreak weighing on jobs.

KANCHANABURI: Park authorities have ordered a former managing director of Thai Dairy Industry Co to tear down his resort within 30 days as it sits on public land in Erawan National Park.

CHIANG RAI: An assistant village head has been charged with dismembering his mother in a fit of anger after she threatened to tell police he had raped his teenaged daughter.