Line Corporation Inc, operator of Line messaging app, has banned the Thai-made "Red Buffalo" sticker which has been made available less than 24 hours ago. 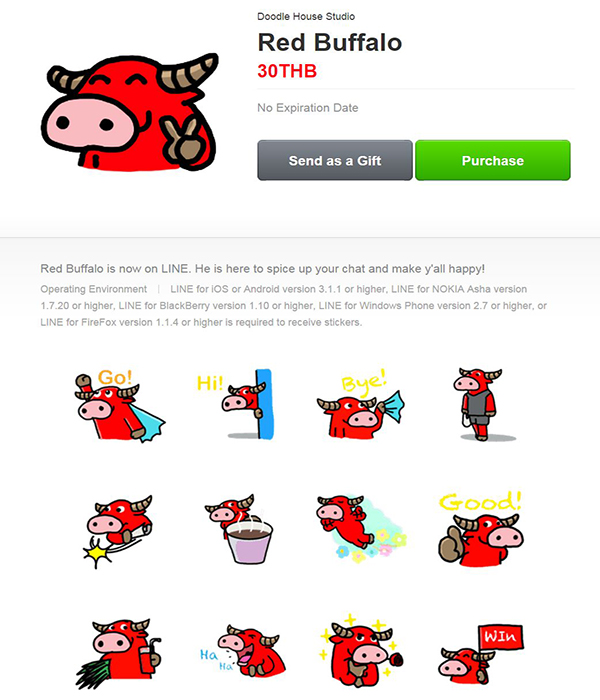 Line sells cartoon-like sticker sets to let users express their feelings as well as exchange greetings and frequently used text quickly without having to type.

During the political conflict of the past eight years in Thailand, "red buffaloes" is a term used mainly in online communities to refer to red-shirt protesters by people who do not share their causes.

In Thai, the term "buffalo" refers to a stupid person.

The red shirts, however, generally do not feel the term is an insult. Many even identify with and take pride in it.

By 2pm on Tuesday, the 30-baht sticker was no longer available on the Line sticker shop, the only place users can get the set.

A Line executive told the Bangkok Post on Tuesday the reason for the removal was politics.

The creator of the sticker is Kwai Dang Community, who wrote on his Facebook he was so glad many liked his sticker.

He claimed it became No. 8 best-seller in Thailand when it was removed from the shop.

"I accept and understand Line's decision. I have no problem with it," he wrote.

Kwai Dang Community also wrote those who had bought it before the ban could continue to use it but could not "gift" or buy it for another person.

Line told him the character set violated two of its sticker moral guidelines as they "may slander, injure, or attack the reputation of a particular person, nationality, or group" and "may potentially attack a religion, culture, people group, or nationality".

"When I created it, I wanted to make it free but Line said I would need 2-3 million baht to do that.

"Since I didn't have that kind of money, my only option was to make it one of Line's Creator stickers, which are not free but prices are low," he said.

Kwai Dang Community said he first submitted the sticker on April 24 and it was put on "waiting for review" status.