Much of the architecture in Southeast Asian countries has been enormously influenced by European styles. Visitors to Indochina, for example, get to appreciate French heritage sites, while British colonial character can be seen in Myanmar. Some of the most interesting examples of European architecture, however, can be seen in Thailand. 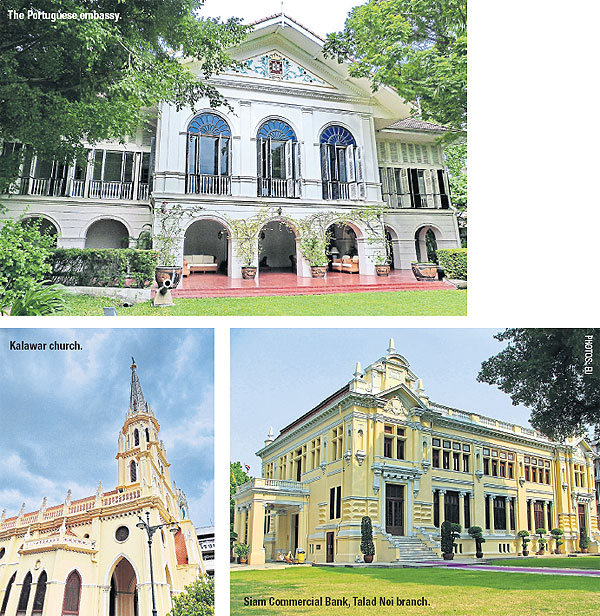 The uniqueness of the European-style architecture in Thailand is a blend of Thai and different European styles. Each of the different architectural sites have now been compiled into the European Heritage Map and Cultural Calendar of Thailand app.

The app is the joint project of a variety of European diplomatic representations and cultural institutes in Thailand to promote awareness and appreciation of the long and rich history of Euro-Thai relations and to highlight the vibrant European cultural exchange of the present.

The mobile app is a follow-up project of last year's printed version of the European Heritage Map of Bangkok and Ayutthaya.

"Encouraged by the very enthusiastic reception of the map, we have decided to expand this digital version to cover the whole of Thailand. From 65 heritage sites on paper, the mobile app now covers some 250 sites that represent a common heritage resulting from centuries of Thai-European interactions," said Ambassador Jesús Miguel Sanz, head of the delegation of the European Union to Thailand.

The app has been designed under close co-operation between the European Union National Institute for Culture (Eunic) Thailand cluster, the EU Delegation, and the embassies of Denmark, France, Italy, the Netherlands and Portugal; Alliance Française, Goethe Institute and British Council. The total development cost of the mobile application — which is available in English and Thai language for both iOS and Android platform — is about 500,000 baht.

Talisman Media director of business development Willem Deenik, who is the project developer of both the paper and digital version of the European heritage map, noted that besides learning about the heritage sites on the application, people can view an up-to-date overview of all cultural events organised by the EU member states' embassies and cultural institutes in Thailand.

"The European cultural calendar is updated every week and lists detailed information, from movie screenings, to fashion weeks, to dance performances and from art exhibitions to lectures," he said, adding that the app, which is an ongoing project, covers 250 sites spread across 25 different cities around the country.

After the Thailand project is completed, the mobile app will be further developed to incorporate neighbouring countries, such as Malaysia and Vietnam and will also be available in other Asian languages. Luc Citrinot, editor of Colonial Heritage Asia guide, noted Thailand is one of the clearest examples of diverse European heritage and styles in the region.

"Thailand, in comparison to other countries in this region, is unique because it has never been colonised. This means that the kings have played a major role in preserving the European architecture. Because of this, the diversity of architecture here cannot be compared with anywhere else, like Vietnam, Myanmar, Singapore, Malaya or Indonesia. Hanoi is a beautiful town, but it's entirely French."

He pointed out that the Grand Palace (Chakri Maha Prasat) is a perfect example of the blend between Thai and Western architecture, combining typical Thai roof spires with an Italian neoclassical facade. A former private residence, Baan Norashingh (Government House) and Baan Phitsanulok were inspired by the typical Venetian late-gothic style, while the British Club and British embassy were typical of a British style. Wat Benjamabophit, meanwhile, is a fusion of Thai and Italian architecture.

"With this mobile application, more Thai people will look at and be interested in it and teachers will be more aware," said Citrinot, adding that it is first and foremost the education system in Thailand's responsibility to raise Thai people's awareness of history, culture, architecture and fashion. 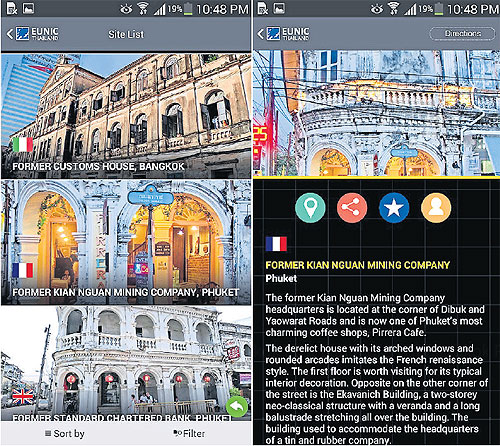 The European Heritage Map and Cultural Calendar of Thailand app.