TOKYO - Japanese toymaker Tomy on Wednesday unveiled a multi-talented humanoid robot, named "Robi jr.," which can converse using some 1,000 phrases and belt out about 50 songs, as well as move its limbs and head. 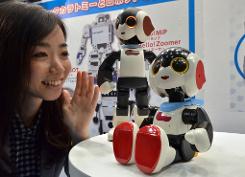 Japan's toy maker Tomy employee enjoys a conversation with a little humanoid robot "Robi jr." which can speak some 1,000 phrases and makes gestures, at a press preview at the Japan Robot Week exhibition in Tokyo on October 15, 2014

The company said it will put the Japanese-speaking humanoid, designed by well-known roboticist Tomotaka Takahashi, on the market early next year at a price of 15,000 yen ($140) apiece at stores and online in Japan.

Its Chinese-speaking siblings will also debut in Taiwan and Hong Kong at around the same time, a company official said, after Robi jr. was unveiled at the Japan Robot Week exhibition in Tokyo.

The googly-eyed, 20 centimetre (7.9 inches) high robot was designed to resemble a six-year-old, according to the firm, which says it is equipped with voice recognition and calendar functions so it can respond when owners ask it for the time.

When asked to sing a song, the robot will answer, "Okay. Then let's sing along together" or "No. Ask me later because I am busy", depending on "its mood".

Political activist "Ja New" Seritiwat incredulous as the police investigation into the vicious, public assault on him last June is put hold on hold because the attackers "cannot be identified".