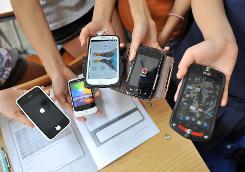 South Korea's spy agency says more than 20,000 smartphones may have been infected by the apps that were posted on S.Korean websites between May and September

The National Intelligence Service said more than 20,000 smartphones may have been infected by the apps that were posted on South Korean websites between May and September, an aide to lawmaker Lee Cheol-Woo of the ruling Saenuri Party told AFP on Wednesday.

The NIS said it had worked with the websites' owners and the government to remove the applications and block relevant hacking channels.

The agency's report also said more than 75,000 hacking attempts were made against government agencies and their affiliates between 2010 and September this year -- with many of them believed to have originated in North Korea.

Investigations into past large-scale cyber assaults have concluded that North Korea was the source.

The North is believed to run an elite cyber war unit of at least 3,000 personnel, but it has denied any involvement and accuses Seoul of fabricating the incidents to fan cross-border tensions.