NEW YORK - New York's Times Square will be illuminated by the world's highest resolution video display screen of its size -- nearly as big as a football field -- when the digital billboard is turned on Tuesday evening. 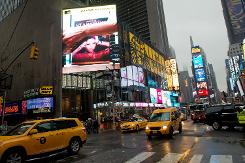 The panel, located on the side of a hotel, is eight stories tall and intended for advertisements similar to those on dozens of other screens lining the bustling New York crossroads.

But as "the highest resolution LED video display in the world of this size," it will produce "deep, rich black levels and unsurpassed vertical viewing angles," said Clear Channel Spectacolor, which sells advertising for the space.

The 24-million-pixel display -- measuring more than 25,000 square feet (2,320 square meters) -- will feature digital art by Universal Everything studio until Google takes over with ads on Monday until the new year.

"We experienced tremendous pre-sale interest, and the display is sold out to one advertiser through January 2015," said Harry Coghlan, president of Clear Channel Outdoor New York.

The giant screen is also connected to high-definition crowd cameras to film spectators and possibly broadcast them live.

The company did not disclose the price of leasing the screen, but the New York Times placed the figure at more than $2.5 million for four weeks.

Hundreds of thousands of people -- New Yorkers and tourists alike -- walk through Times Square each day.

Scientists have discovered another clue to the origins of the virus that causes Covid-19, with bats living in caves in Laos found to be carrying a similar pathogen that experts suggest could potentially infect humans directly.

KIEV: Gunmen opened fire with automatic weapons on a car carrying a senior aide to Ukrainian President Volodymyr Zelensky on Wednesday, in what officials said was an attempted assassination in response to his crackdown on oligarchs.