A South African court Thursday overturned an interim gag order on a popular ventriloquist that prevented him from criticising a prominent Afrikaner singer as racist. 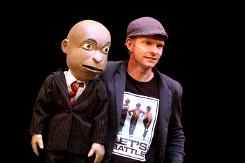 Conrad Koch talks to his puppet Chester Missing before a performance at the Market Theatre in Johannesburg on May 7, 2013

Magistrate Naren Sewnarain said musician Steve Hofmeyr had "exposed himself to criticism, satire, ridicule and the court is not satisfied that he should be accorded the protection."

The satirist and his puppet are known for controversial political commentary.

Koch's criticism of Hofmeyr through his puppet followed a tweet by the popular singer which said: "Sorry to offend but in my books Blacks were the architects of Apartheid. Go figure."

That sparked outrage on social media networks but gained support among the far right.

Koch then challenged Hofmeyr online and criticised businesses which sponsored him and his concerts.

Earlier this month, the singer obtained an interim court order to stop Koch from threatening, harassing, or making defamatory statements about him.

The comedian was also not allowed to tag Hofmeyr on social media or mention him in television and radio interviews.

Koch appeared on Thursday at the Randburg Magistrate Court with his puppet in tow in a first-of-its-kind case in South Africa.

His lawyer Steven Budlender argued that Hofmeyr was a public figure and that "through his public and robust advocacy of racism he has invited a robust response".

"He wants to continue making provocative statements and when people criticise, he says they're not entitled to criticise him and therefore hides behind a protection order," said Budlender.

The singer did not show up in court but a fellow far right activist argued on his behalf that the singer's tweet was not offensive.

"Hofmeyr contends that everyone who participated in the pre-1994 South Africa... is jointly responsible for apartheid, regardless of colour," said Dan Roodt.

He said Hofmeyr suffered psychological and financial harm as a result of Koch's tweets.

Koch's lawyers argued in turn that Hofmeyr wanted to be allowed to express racist views unchallenged.

Hofmeyr is one of South Africa's top recording artists but is increasingly known for his divisive comments. He has recently taken to singing the national anthem of the former apartheid government during performances.

Koch, who has a large social media following and features on a weekly television comedy show, has also faced online criticism for using a dark-skinned puppet in his act.