MOSCOW - Russian authorities convinced Facebook to shut off a page inviting people to attend a rally in support of an opposition politician, drawing ire from Internet users Sunday. 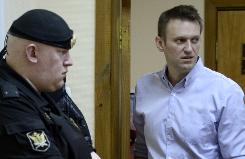 Supporters on Friday created an event page for January 15, the day President Vladimir Putin's biggest critic Alexei Navalny will hear his verdict in a controversial embezzlement case which could see him sent him to prison for up to 10 years.

Russia's Internet watchdog Roskomnadzor said Sunday that the page has been blocked on orders of the general prosecutor.

The prosecutor "demanded to limit access to a number of resources calling for an unsanctioned mass event, including social networking groups. The demand has been fulfilled," RIA-Novosti news agency quoted spokesman Vadim Ampelonsky as saying.

The Facebook event, called "Public gathering to discuss the verdict", had over 12,000 people signed up at the time it was blocked, and now opens only through a non-Russian IP and only for non-Russian users.

Navalny, whose leadership role in the opposition was built up over the years via his popular anti-corruption blog and carefully-managed Internet campaigns, criticised the social networking giant for quickly bending under Kremlin's pressure.

"It's a rather unpleasant and surprising behaviour by Russian Facebook. I thought they would at least demand a court order rather than rush to block pages as soon as crooks from the Roskomnadzor (the Internet watchdog) ask," he wrote on his personal page.

Former US ambassador to Moscow Michael McFaul wrote on his Twitter blog that the block set a "horrible precedent" and that Facebook should correct their "mistake" as soon as possible.

Supporters quickly signed up onto newly-created event pages and made new ones blasting Facebook's "censorship".

Navalny, a 38-year-old lawyer, is accused together with his brother Oleg of embezzling nearly 27 million rubles (more than half a million dollars at the exchange rate at the time) when Yves Rocher Vostok, the company's Russian wing, used their delivery firm.

The case is only one of many against him. A previous probe into embezzlement of a state timber company saw him sentenced to five years though the sentence was suspended later.

In his final word this week Navalny, who has spent nearly a year under house arrest, said the case is based on