Facebook said profit soared on the wings of mobile ad revenue but stressed it is more concerned with investing in the future than making quick cash. 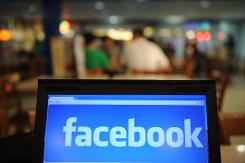 Facebook said that revenue in the final quarter of last year hit $3.85 billion as the number of active monthly users increased 13 percent to 1.39 billion

Facebook co-founder Mark Zuckerberg described 2014 as a year of heavy investments, with "big bets" placed on mobile communication and next-generation computing with multibillion-dollar buys of WhatsApp and the Oculus virtual reality startup.

A strong showing in ads served up on smartphones or tablet computers helped Facebook earnings beat analyst forecasts: profit in the final three months of last year jumped to $696 million as revenue surged to $3.85 billion.

But investors will be concerned by an 87 percent rise in costs and expenses.

Shares sank slightly, more than one percent to $75.05, in after-market trades that followed release of the figures.

Despite claims from competitors that Facebook is losing relevance with a younger audience the number of people using the leading social network monthly climbed to 1.39 billion.

Zuckerberg told financial analysts the company was focused on serving the entire world with projects such as Internet.org, and that would require a lot of effort and investing over a course of years.

One analyst challenged Zuckerberg to explain why he thinks investors care about connecting the world when the expense of bringing Internet service to more people in developing countries appears greater than the potential return.

"It matters to the kinds of investors we want to have because we are a very mission-driven company," Zuckerberg replied.

"If we were only focused on making money, we might put all our energy into ads for people in the US and other developed countries, but that is not just what we care about here."

He reasoned that if Facebook becomes a main online platform in developing countries, it will benefit over time as economies improve in those parts of the world.

Gartner analyst Brian Blau said that while Zuckerberg's position was noble, it is backed by business strategy.

"Zuckerberg has a good track record of getting a vision, sticking to it and executing on it," Blau told AFP.

"So if he really believes in this, he must have the resources to make it happen. It is a very long-term bet, and if he succeeds Facebook will be a social connector for people around the world."

Facebook is testing a lightweight version of its mobile app for mobile phones with poor-quality Internet connections in emerging markets.

A spokesman told AFP that the "Facebook Lite" Android app is designed "for people on 2G (second-generation) connections or in areas of limited Internet accessibility."

Most of Facebook's growth is coming from emerging markets, but many people lack the phones or computers needed for the full-featured app.

Notably, Facebook saw its first quarter of taking in more than $3 billion overall from ads, with about two-thirds of that coming from mobile advertising revenue, which soared 69 percent from the same period a year earlier

For the full year, Facebook's profit nearly doubled to $2.9 billion and revenue jumped 58 percent to $12.8 billion.