SAN FRANCISCO - Live streaming video from a smartphone may soon be known as "meerkatting" thanks to a new app that allows anyone with an iPhone to become a roving reporter. 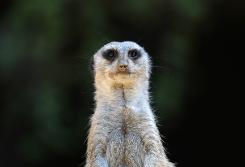 In the rapid-fire Twitterverse, the Meerkat app has become a sudden hit with tens of thousands of users trying it

Meerkat integrates with Twitter, allowing users of the messaging platform to launch live video streams with a single touch of an on-screen button.

In the rapid-fire Twitterverse, Meerkat has become a sudden hit with tens of thousands of users trying it.

Meerkat "marries the wide potential of livestreaming with the instant and social strengths of Twitter. Two great tastes that go so well together," wrote Hawaii-based consultant and blogger Ryan Ozawa.

"Imagine the applications for breaking news. Imagine deploying Meerkat at an event, with broadcasters and viewers easily interacting throughout. I could easily see myself falling head over heels in love with Meerkat."

The app uses the name and image of a meerkat, which is a long-necked carnivorous relative of the mongoose that lives in the deserts of southern Africa.

The news blog TechCrunch described Meerkat as "the livestreaming app Twitter should have built."

The one-to-many messaging platform announced Friday that it was buying the maker of a rival video streaming app called Periscope, which is in beta testing and has not yet been released to the public.

Twitter did not release details about the deal, but media reports said Twitter was paying between $50 million and $100 million for the app, which has so far been available by invitation only.

It was not immediately clear whether Twitter would maintain Periscope as an independent app or integrate it into the platform. Both companies are based in San Francisco.

"That is a worry for Meerkat," Danny Sullivan, founder of the blog Search Engine Land, said of Twitter buying Periscope. "If Twitter gets their own live video, they will have a tendency to want to favor that."

Sullivan "meerkatted" -- some are calling it "meercasting" -- a stroll around the South By Southwest Festival (SXSW) in Austin, Texas, shortly after arriving there on Friday.

"It is kind of neat to give a taste of South-By to people who have never seen it and want a taste of it," Sullivan said, referring to the festival by its informal name. "It works surprisingly well; it is very impressive how easy it was to get going with the live stream."

With Meerkat, a tweet is fired off containing a link that anyone can click to be connected to the stream while it is in progress. Tiny profile icons pop up to show who is tuning in to broadcasts.

"At one point we had 110 people all walking around with me," Sullivan said.

Videos are available only at Meerkat while they are live, but the app gives users the option of saving what they have recorded on their devices.

On Friday, an array of Meerkat streams flowing from SXSW included casual tours of Google and PayPal lounges along with impromptu interviews there by journalists who have seized on the application as a tool for giving intimate glimpses at news gathering.

The Iowa governor's office announced on Friday that it will use Meerkat to live-stream press conferences and other events on Twitter.

"By using the Meerkat app, Iowans will be able to join us as we tour communities following natural disasters; as we visit a small business, listen in to our weekly press conferences or even as we hit the trail for our annual 99-county tour," said Iowa lieutenant governor Kim Reynolds.

Super fast 5G in the US still a work in progress

Do what you previously couldn't with the latest Samsung S21 phones