Thailand made no requests for information on users

WASHINGTON - Snapchat, the social network for users who like the security of disappearing messages, released its first transparency report Thursday showing hundreds of requests from US and foreign law enforcement agencies. 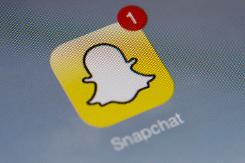 Snapchat, the social network known for its disappearing messages, releases its first transparency report showing hundreds of requests from US and foreign law enforcement agencies.

The report said Thailand made no requests for information on users or blocking of posts.

Between Nov 1 and Feb 28, Snapchat said it received 375 requests from US law enforcement officials, and handed over at least some user data in 92 percent of those cases.

"While the vast majority of Snapchatters use Snapchat for fun, it's important that law enforcement is able to investigate illegal activity," Snapchat said in a blog post.

"We want to be clear that we comply with valid legal requests."

The requests were mostly in the form of subpoenas, warrants or court orders, along with a smaller number of emergency requests.

Outside the US, Snapchat received 28 requests and produced data in six of those cases. The requests came from Britain, Belgium, France, Canada, Ireland, Hungary and Norway.

Like most of its peers, Snapchat said it opposed efforts to give law enforcement special access through "backdoors."

"Privacy and security are core values here at Snapchat and we strongly oppose any initiative that would deliberately weaken the security of our systems," the blog posting said.

"We're committed to keeping your data secure and we will update this report bi-annually."

The report did not include data on US national security requests, which may only be released after a six-month delay.

"Even though Snapchat has promoted user privacy and autonomy since its founding, we've only recently been able to systematically track and report requests for user information," the company said.

It said it will publish more details in July on government requests and demands to remove content.

Snapchat last year reportedly rejected a $3 billion takeover by Facebook and was later valued at some $10 billion following a private equity round of investment.

Another investment reported this year pushed up the valuation to some $15 billion.

Snapchat has not disclosed key financial information or numbers of users but some analysts say it is used by as many as 100 million people or more.

Snapchat rocketed to popularity, especially among teens, after the initial app was released in September 2011. Created by then Stanford University students, the app allows the sending of messages that disappear shortly after being viewed.