BEIJING - Apple has won an appeal in China over patent rights to voice recognition software such as the iPhone's "Siri", with a court overruling an earlier decision that had gone against the US technology giant. 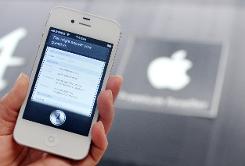 Siri responds to a user's commands through voice recognition software and made its formal debut with the release of the iPhone 4S in 2011, while Zhizhen claims its earlier "Xiao i Robot" product works in a similar way.

Apple asked a Chinese intellectual property body to declare Zhizhen's original patent ineffective but the request was rejected. The US firm then took legal action against both the agency and Zhizhen, but lost.

"The move means Apple's Siri voice recognition system did not infringe the protected rights of other patents and Apple fans can continue enjoying the conveniences brought by the technology," the court said in a statement on Tuesday.

Zhizhen filed a lawsuit against Apple for intellectual property rights (IPR) infringement in June 2012 at a court in Shanghai, where the Chinese firm is based.

The announcement came days before the long-awaited Apple Watch launched Friday in select parts of Asia including China, which is expected to be a key market.

The dispute is not the first time that Apple has been embroiled in IPR controversy in China, where its products are hugely popular.

Apple in 2012 paid $60 million to settle a dispute with another Chinese firm over the iPad trademark.

BEIJING: China is planning a mega dam in Tibet able to produce triple the electricity generated by the Three Gorges -- the world's largest power station -- stoking fears among environmentalists and in neighbouring India.

Fans of LG smartphones bemoan end of an era

Welcome to 'year of fact-checking'