PARIS - French newspaper Le Monde is bucking seven decades of tradition of being an afternoon daily to start offering a morning publication -- but only on mobile devices. 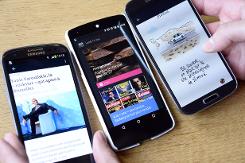 The new electronic edition, to be known as La Matinale, is squarely aimed at a younger market than that served by its venerable print version.

"This is a historic moment for us because it will be our first morning edition in 70 years of existence," said Le Monde's outgoing director, Gilles van Kote.

The offering may be nothing new for Le Monde's rivals and international counterparts, but it rings as something of a revolution in the newsroom of the French daily, which has long debated its stand-alone status as an afternoon title.

It appears to be part of a shake-up Le Monde is undergoing. On Wednesday, van Kote is expected to be replaced by his deputy, newsroom manager Jerome Fenoglio, in an employee vote likely to win 60 percent support.

Fenoglio promised a more "playful" approach to reading the news on La Matinale, though he stressed Le Monde's high standards would continue to be upheld.

The new app appears in part inspired by the dating app Tinder, allowing users to swipe through some 20 proposed news and culture items, storing some for reading and discarding those of no interest. The selection process remembers the reader's tastes to offer more targeted items in future.

La Matinale will follow other news apps in offering a third of the content for free, to give readers a taste, and charging 6.99 euros ($7.80) a month access to the rest. Subscribers to Le Monde's separate online edition will get full access with no further charge.

The app was co-financed with a fund started by Google for French media outlets. In 2014, the fund gave Le Monde 1.8 million euros for various digital initiatives.

Le Monde currently has a circulation of around 280,500 per day, but -- like all other French dailies -- is seeing that crumble as readers increasingly turn to the Internet.