SAN FRANCISCO - Google on Monday said it is sidelining its crowd-sourced map making tool to implement a way to prevent bogus edits, some of which have proven embarrassing. 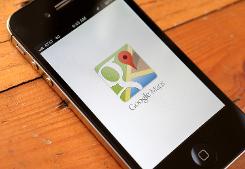 Google is sidelining its crowd-sourced map making tool to implement a way to prevent bogus edits, some of which have proven embarrassing

The Map Maker service will be "temporarily unavailable" beginning Tuesday, according to a message posted online.

"As some of you know already, we have been experiencing escalated attacks to spam Google Maps over the past few months," Pavithra Kanakarajan of the Map Maker team said in a written explanation of the decision.

"The most recent incident was particularly troubling and unfortunate -- a strong user in our community chose to go and create a large scale prank on the Map."

Last month, the California-based Internet giant began re-evaluating its user-edited online map system after the latest embarrassing incident -- an image of an Android mascot urinating on an Apple logo.

The image, part of a crowd-sourced edit on Google Maps, appeared briefly at a Pakistani location before it was removed.

In a statement to US media at the time, Google apologized and said it was working to step up verification of user edits on its Map Maker platform.

Earlier in April, someone revised the map of the White House in Washington to include a new business called "Edwards Snow Den," an apparent effort to draw attention to former national security contractor Edward Snowden, who leaked a trove of secret documents on US surveillance.

The pranks were done with map making tools that allow any user to edit online maps. Google let people modify maps in the spirit of tapping into intimate, local knowledge to make them more accurate and detailed.

The mischief caused Google to suspend an automated edit approval process, shifting to manual reviews that take more time to conduct and have resulted in a backlog of proposed map modifications, according to Kanakarajan.

"We have been analyzing the problem and have made several changes," she said.

"However, it is becoming clear that fixing some of this is actually going to take longer than a few days."