WASHINGTON - Smartphones are now used in 72 percent of US homes and have become the third most owned electronics item for Americans, a survey showed Monday. 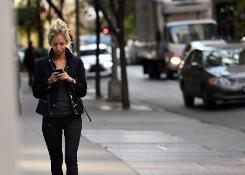 A woman uses her smart phone as she walks on November 13, 2014 in New York

The annual survey by the Consumer Electronics Association found that smartphones trail only televisions, which are in 97 percent of US households, and DVD players, in 78 percent.

"These mobile devices have greatly influenced the type of content Americans consume, and given birth to new emerging tech categories such as wearable activity trackers and smart home devices that consumers are beginning to embrace more broadly."

The survey showed smartphone ownership jumped eight percentage points in the past year. Meanwhile tablet computers saw a big gain of nine points and are present in 54 percent of US households, according to the study.

Among the fast-growing items were fitness trackers, up six points to 11 percent, and digital media streaming devices, rising five points to 29 percent, the association said. Basic cell phones meanwhile were on the decline.

The share price of Central Retail Corporation Plc ended in the red on the first day of trading Thailand's largest-ever market capitalisation equity.