WASHINGTON - The Rappahannock Regional Jail in Virginia needs a facelift. The "decor was quite dated and it was in desperate need of a refreshing paint job," said Shane S following his recent incarceration. 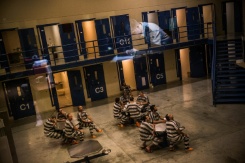 "The bed was very uncomfortable."

Meanwhile, at Florida's Broward County Jail, "the food is not that great, but the personal attention makes up for it," writes Halle C.

"I come back all the time because it's my home away from home."

Writing Yelp reviews and other online postings of jails is increasingly popular and offer an occasionally comedic and sometimes illuminating inside perspective on the jail and prison system.

America's overloaded prisons and the struggles of its judicial system are also generally under the political spotlight. Barack Obama will make the first presidential visit to a federal prison in Oklahoma next week as he pushes for criminal justice reform.

At Berks County Jail in Pennsylvania, reviewer Johnny W. gave it one star out of five.

"The guards are split into two groups," he wrote. "Group A is all the people I either went to school with or knew from the streets. Group B was made up of some weird hybrid alien race of people who probably consider Hitler a role model."

On the positive side, he noted, "the only redeeming quality was the food. I mean this place gives you a lot, I damn near gained twenty pounds by the time I left and I only had like a hundred days in that joint!"

Humor notwithstanding, these reviews can sometimes shed light on institutions which are closed to public scrutiny.

This is especially important because of the absence of an independent prison monitoring entity in the United States, said David Fathi, who directions the National Prison Project for the American Civil Liberties Union.

"In the absence of any formal mechanism, I think these informal sources of information can be helpful in alerting people to problems in these institutions," Fathi told AFP.

"Anything that opens up this closed world can be useful."

Fathi said it's not clear if prison administrators make use of the reviews to investigate abuses or other problems.

"It would be nice if prison wardens were as responsive as restaurant owners but that doesn't seem to be the case," he said.

Reviews can also be useful for family and friends of inmates, and some lawyers post reviews after visiting facilities.

At the Santa Ana jail, "parking is iffy... and be prepared to wait if you're there weekends," he wrote.

But he gave Theo Lacy jail five stars, calling it "the newest, and thus the cleanest and best organized of all the jail facilities in the County of Orange."

"I have always believed in the aggregate power of individual users," to provide useful information, Miller told AFP.

He added that the reviews can be useful for family members and others dealing with the institutions.

Prisoners outside the United States have also warmed to the idea of online reviews.

"Inferior long term stay accommodation compared with other facilities at this price point," he wrote.

"I must agree with other reviewers that food quality is a problem; perhaps engaging the services of a cordon bleu chef may raise the standards. Front desk staff could have been a bit more helpful."

"They are very mean to the inmates in Division 2 & 3," Gaby Delgado wrote in a Google review of the Cook County Jail in Chicago.

"They treat them like garbage.. the food is horrible! Inmates are there to become better persons not to become more violent than they are!"

Other reviewers seek to make the most of a difficult experience.

The San Quentin State Prison in California "isn't as bad as it's made out to be," wrote Yelp user Elaine N.

"Compared to Gldani (in the Republic of Georgia) or Alcatraz, SQ is a pretty okay place to be. There are several activities to choose from throughout the day to maximize productivity (ie. yoga, wood shop, engineering, anger management, group therapy, etc.)"

"At no time did the officer violate any of my constitutional privileges and even gave me a juice box after I said I was thirsty," she wrote.

"So, if you're going to get arrested, do it in Arlington County."