MOSCOW - A Russian atheist social networking page was briefly blocked Monday on the back of a court ruling that it insulted the feelings of religious believers. 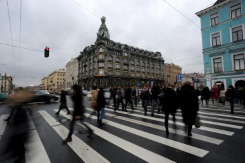 The view of a building where the social network VKontakte rents an office space in St. Petersburg on November 1, 2013

The group called "There is no God" on the VKontakte networking site -- which had over 26,000 followers -- went offline for users across the whole country but started working again after sparking online debate.

A moderator's message on the webpage said it was blocked due to a ruling by a court in the mainly Muslim North Caucasus region of Chechnya in May 2015.

"The community has been blocked due to the possible violation of the site's rules," it said.

VKontakte, Russia's largest social networking site, did not respond to a request for comment.

A scan of the court decision published by Russian media accused the page of publishing materials that can "insult the feelings of Orthodox Christians", based on an inspection of the page by prosecutors on April 6.

A cached version of the group's website showed posts with pictures making fun of religion, mostly focusing on the Russian Orthodox Chuch.

One is a cartoon drawing of Jesus telling a surgeon during an operation: "I created this cancer, how dare you remove it?", with the surgeon replying "Shut up, Jesus."

It was not clear which exact posts were deemed insulting and administrators of the page could not be reached for comment.

"I don't consider myself an extremist, we just have a particular humour," the online group's moderator Sergei Vasiliyev told AFP.

"The group is there so that people stop fearing superstitions," he said.

A spokeswoman at Roskomnadzor, the Russian media regulator which compiles a register of blocked websites, told AFP they were merely complying with the court ruling by ordering VKontakte to block the page.

The prosecutor's office in Chechnya, a conservative Muslim republic that is ruled with an iron fist by Ramzan Kadyrov, said on its website in early May that it "uncovered materials during monitoring of the Internet which insult the feelings of the faithful."

Kadyrov has overseen increasingly conservative policies in the region. In January, he called a massive rally of hundreds of thousands against Charlie Hebdo, not long after the French magazine's offices were attacked by jihadists for publishing cartoons mocking the Prophet Mohammed.

The influence of Russia's Orthodox Church in official circles has grown dramatically under the leadership of ex-KGB agent President Vladimir Putin.

Thailand coach Rakphol Sainetngarm praised his players for their fighting spirit after they drew 1-1 with Morocco thanks to a last-gasp equaliser in the Fifa Futsal World Cup in Lithuania on Thursday.