And the winners are True, AIS
Business

And the winners are True, AIS

Offers had risen to 80.9/ billion baht as of 7pm yesterday.

After 86 rounds in almost 30 hours of bidding over two days, as expected the country's largest mobile operator AIS led with 41 billion baht for the second licence on the 1800-MHz spectrum to provide 4G service for 18 years, 158% above the reserve price. 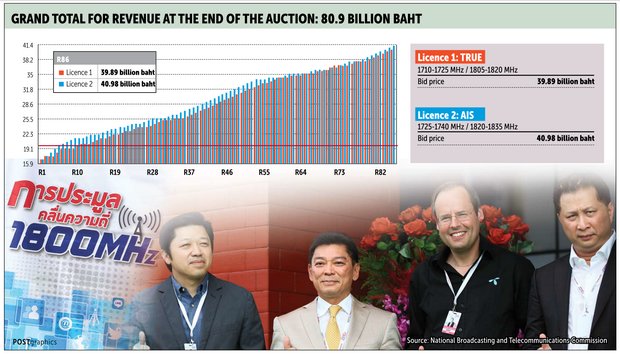 The bidding was declared over. The National Broadcasting and Telecommunications Commission (NBTC) had expected total proceeds of 40.98 billion baht.

4G commercial service is expected to become available next February, with at least 20 million users migrating from 3G on the True and AIS networks within two years.

The price of 40 billion baht for a 1800-MHz licence is high relative to international standards and the country's population.

"Based on the 80 billion baht for the 30 MHz of bandwidth on the 1800-MHz spectrum, the bid is 18 baht per megahertz per person," NBTC secretary-general Takorn Tantasith said. "This figure is equal to those in developed countries."

"Operators must cut costs without passing the burden on to consumers," he said.

"The tariff conditions have already been identified in the draft auction rules," Mr Takorn said.

Commercial 4G service on the 1800-MHz spectrum is expected to be launched by next January.

Mr Takorn said the winners of the 1800-MHz licences must also provide special tariff packages for low-income earners and disabled citizens as a condition of receiving a licence.

"4G operators cannot charge customers above the rates we have set, no matter how much their costs soar or whatever the price of the 4G licence they get," Mr Takorn said.

Col Settapong said he accepted that the bids went beyond expectations.

"The term of 18 years for the expiry date of the 1800-MHz spectrum could be a crucial reason why bidders acted as they did, as bidders will have a long-enough time to provide 4G service and turn a profit," he said.

"As operators, [bidders] already have a solid base of customers without having to roll out an entire new cellular network infrastructure, and the country's demand for wireless broadband service is skyrocketing. That's why operators are vying for a licence," Mr Tom said.

Another industry veteran said the number of mobile data users would increase by three or four times within five years, driven by the emerging Internet of Things and development of Thailand's digital economy.

NBTC member Prawit Leesathapornwongsa said operators could survive in the business because they had strong experience in mobile operations and management.

Somkiat Tangkitvanich, president of the Thailand Development Research Institute, said the fierce competition for the 1800-MHz band arose with the entry of new player Jasmine International, which secured a foreign strategic partner, as well as the postponement of the 900-MHz spectrum auctions from Nov 12 to Dec 15.

The bidding prices this week were not the highest in the world and were even lower than in some other Asian countries, he said.

In the wake of the marathon 1800-MHz auctions, the NBTC plans to reduce the bidding phase of each round from 20 minutes to 10 minutes for the auctions of two licences on the 900-MHz spectrum scheduled for Dec 15.

Under the existing bidding instructions of the 1800- and 900-MHz auctions, each round lasts 20 minutes.