A woman uses her smartphone while waiting for service at a Bangkok bank. A survey reveals rising smartphone data consumption in Thailand. SEKSAN ROJJANAMETAKUN

Thais spend an average of 160 minutes a day on smartphones, the second-highest in Southeast Asia after Malaysia, says India-based mobile analytics company Vserv.

Malaysian smartphone users spend an average of 187 minutes per day on their mobiles while users in the Philippines spend 140 minutes and Indonesia 129 minutes.

The survey was conducted for Vserv by Nielsen Informate Mobile Insights with 565 smartphone respondents in Thailand.

"Thai smartphone users are unique with average data consumption of almost 60% higher than other countries in the region," said Pranab Punj, vice-president for global marketing of Vserv.

This consumption is set to increase with the advent of fourth-generation (4G) wireless broadband service as the demand for content, especially video content, will grow, he said.

The study found four out of five smartphone users in Thailand stream video and music on their devices, spending 13 minutes per day, the highest in Asean, on mobile TV or watching videos.

There is steady demand for social media, music, gaming, news and video, with consumption of streaming videos and mobile gaming projected to increase drastically.

The report separated users into six categories based on time spent and app usage behaviour.

The first group is social stars, which represent 20% of respondents, predominantly males aged 18-24 who spend an average of 140 minutes per day on their smartphones, of which 73 minutes are on social networks, chat and voice over IP (VoIP) apps, with 11 minutes for browsing.

The second group is power users, making up 17% of respondents, predominantly males aged 31-40 who spend an average of 208 minutes on smartphones per day, the highest of the segments. The majority of time is spent on gaming, chat and VoIP apps. Line and YouTube are most popular app and site.

The third is explorers, representing 13% of the total, who are predominantly females aged 25-30 who spend 190 minutes on smartphones per day.

The fourth is data guzzlers, mainly males aged 25-30, which use the most data at 604 megabytes per second (MBps), with 169 minutes per day spent mostly on gaming and social apps.

The fifth is conversationalists, who are mostly females aged 18-24, making up 17% of respondents. They primarily use smartphones to make calls, spending 130 minutes a day on mobile phones. Line and Facebook are their most popular social media platforms.

The final group is dabblers, representing 20% of respondents, mostly females aged 31-41. This group spent 122 minutes on their smartphones, consuming the lowest amount of mobile data at 424 MBps a day. 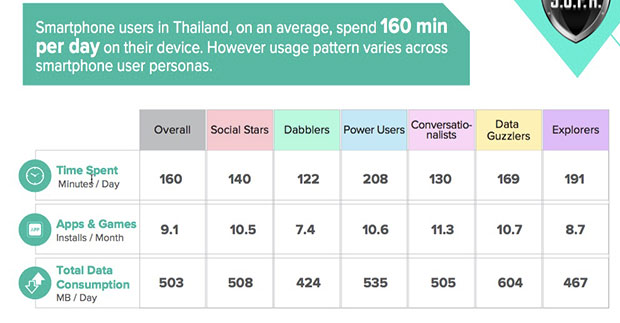