NGO activists in Thailand on Tuesday called on the Lao government to look into the disappearance of a Magsaysay Award winner, who has not been seen for several days.

In a letter sent to the Lao government, parliament and some embassies, they expressed concern about the safety of Sombath Somphone and called for Lao authorities to take action on the case.

"We, civil society organisations in Thailand, urge concerned Lao authorities to take every urgent action with regard to Mr Sombath's disappearance. We look forward to hearing that all immediate and necessary efforts are made to search his whereabouts and investigate the cause of his disappearance," said the letter released by NGO-COD, an umbrella comprising 61 organisations. 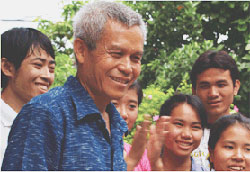 A file picture of Sombath Somphone, a Magsaysay Award winner who disappeared on Saturday in Vientiane.

The letter was also sent to the Thai and Singapore embassies in Vientiane, and to Surin Pitsuwan, secretary-general of the Association of Southeast Asian Nations (Asean).

Mr Sombath, 60, won the award in 2005 for community service. He is founder of the Participatory Development Training Centre in Laos aimed at social development.

He was last seen Saturday while driving home from his office in Vientiane, according to the statement. A source close to him said he left his office around 5pm that day to meet his wife, Shui Meng Ng, a Singaporean, for dinner.

His wife waited and then checked all hospitals after he did not return home that night, and then reported his disappearance to police, the source said.

When asking acquaintances about Somphone’s whereabouts, friends and colleagues found that a friend of his visiting from the US had also disappeared, according to the first source. However, a representative at the US State Department’s press office in Washington said Monday the office had no information about a US citizen missing in Laos.

Somphone’s disappearance follows the expulsion from Laos earlier this month of a foreign NGO director who had spoken critically of the government.

Swiss development group Helvetas’s country director Anne-Sophie Gindroz was kicked out after receiving a 48-hour notice from the Ministry of Foreign Affairs on Dec 7, saying she was no longer welcome in the country due to her “unconstructive attitude” toward the Lao government.

The news about his disappearance has been spreading in social networks.

His disappearance shocked friends and fellow activists in Laos and Thailand, the source added.

BRISBANE: Australia will strongly oppose a Unesco plan to list the Great Barrier Reef as "in danger" over its deterioration caused by climate change, the government said Tuesday.

There were 35 more Covid-19 fatalities and 4,059 new cases diagnosed over the past 24 hours, the Public Health Ministry reported on Tuesday morning.

Covid eases but US won't join EU in opening borders

WASHINGTON: As the Covid pandemic recedes dramatically in the West, Europe is opening its doors to Americans -- but the reverse is not holding true, with the United States not budging on restrictions imposed 15 months ago.

Charter bill exclusion 'by the book'

With the new GROHE Rainshower SmartActive hand shower, the perfect shower experience is just a click away