A Singaporean cartoonist has been arrested for alleged sedition over a satirical comic strip on his Facebook page that appeared to accuse the government of racism, police and his lawyer said Wednesday. 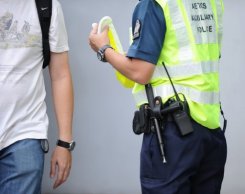 A policeman stands guard outside a hotel in Singapore on June 7, 2012. A Singaporean cartoonist has been arrested for alleged sedition over a satirical comic strip on his Facebook page that appeared to accuse the government of racism, police and his lawyer said Wednesday.

Leslie Chew, 37, was released on bail following his arrest Friday, two days after a complaint was filed about his cartoon strip that lampooned the government for being "racist" toward minority Malays, his lawyer Choo Zheng Xi told AFP.

The strip was posted on Chew's "Demon-cratic Singapore" Facebook page on March 27.

"Police confirm that a 37-year-old man was arrested on 19 April 2013 for an offence under Section 4 (c) of the Sedition Act," police said in a statement.

The arrest was made "following a report lodged by a member of public regarding a series of racially insensitive cartoons which are circulating online", the statement said, adding that "investigations are ongoing".

The cartoon depicts a politician addressing a crowd and praising the talents of expatriate Indian, Chinese and Caucasian communities. A character in the audience asks "What, no mention of Malay talents?", to which another responds "Damn! Racist government".

Chew regularly posts satirical political cartoons linked to current events in Singapore on his Facebook page, which has over 21,000 followers.

Speaking to AFP on Wednesday, Chew said he was "surprised" that he had been picked up by the police.

"I thought I made it quite clear through the disclaimers on the cartoons that my work on Demon-cratic Singapore is purely fictional," he said.

He added that he intends to continue to publish cartoons while he is being investigated as police have not imposed any restrictions.

"I want to continue to amuse my audience. The comics are simply for laughs," said Chew, who is unemployed and makes a living from contributions from his online readers.

Singapore, a multi-racial island nation, clamps down hard on anyone seen to be inciting communal tensions after experiencing bloody racial riots in the 1960s.

Ethnic Chinese make up 74 percent of Singapore's resident population of 3.8 million, with Malay Muslims accounting for 13.3 percent, followed by ethnic Indians, Eurasians and other racial groups.