TRAT - A Thai tourist was killed and five others, including a three-year-old boy, were rescued after a building at Siam Beach Koh Chang collapsed on Saturday morning.

The four-room, two-storey building came down at 7.30am on Saturday after a heavy rain. Kotchakorn Thammachak, 37, reportedly died on the spot while she was sleeping inside the building. The five other victims were trapped under the debris but were freed after a four-hour rescue operation. All sustained injuries.

The hotel said it would cover all medical costs for the injured victims.

Trat governor Channa Iemsaeng ordered an investigation into the safety of the hotel's buildings after inspecting the site with Koh Chang municipality mayor Sanya Kerdmanee.

After the briefing, the governor said the collapsed building was built on top of a waterway. During heavy downpours, the soil beneath the building eroded, leadinmg to the collapse.

He said he had ordered district and municipal authorities to jointly inspect the safety of all buildings at the hotel. If they were found unsafe, the hotel would be closed, said the governor. 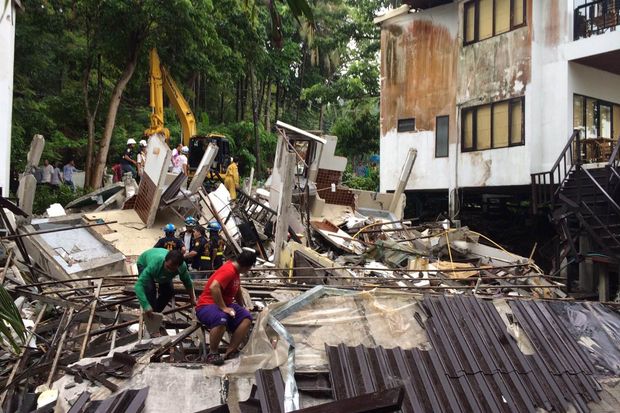