Contract may point to illicit link in Laos

The Department of National Park, Wildlife and Plant Conservation (DNP) has found a copy of a document that might link the Tiger Temple in Kanchanaburi to wildlife trafficking as police prepare to expand a probe against the temple for allegedly supplying tigers to the black market.

Speaking after handing over the details of the DNP's discoveries at the temple to police, department deputy chief Adisorn Nuchdamrong said authorities have seized the photocopy of a contract involving an exchange of breeding tigers during last week's relocation of the big cats.

He said the contract indicates the temple may have been involved in the illegal trade of wildlife. The DNP is also waiting for the results of DNA tests on live tigers and dead cubs found at the temple to confirm its suspicions about the temple serving as a transition point for tiger trafficking, he noted.

He said the details submitted to police should help authorities expand the investigation. The department has filed eight complaints with local police against the temple and the abbot.

According to Mr Adisorn, the department wants police to follow up on a case of missing tigers and determine if there are connections with the new case. Three tigers at the temple went missing in December 2014 and authorities' efforts to find them have made no progress.

The DNP suspected illegal activities at the temple following the disappearance of three adult tigers. Dao Nua, or northern star, went missing from his cage on Dec 21, 2014. Five days later, Fa Kram, or blue sky, and Happy -- both three-year-olds -- also vanished. The department's suspicions intensified after it later found that 13 tigers carried no microchips.

The DNP tried to confiscate seven tigers in 2001 after discovering they were being kept at the temple, but later allowed them to stay after the temple said they were well looked after.

The number of tigers at the temple increased over the years to 147. All have since been relocated from the temple in Sai Yok district to two wildlife centres in nearby Ratchaburi province.

Deputy national police chief Pol Gen Chaloemkiat Sriworakhan, who has been assigned to supervise the case, promised Monday to look into the details and connections between the new and old cases.

The officer visited Kanchanaburi Monday afternoon to to follow up on the investigation. The probe is being handled by Kanchanaburi's Sai Yok police.

Also on Monday, Pradap Pothikanchanawat, director of Kanchanaburi's provincial Buddhism office, went to the temple and found some 10 monks staying there.

The Agricultural Land Reform Office (Alro) has announced it would revoke the temple's right to use the land which was allegedly misused. The temple is also accused of encroaching on forest areas covering almost 1,000 rai.

According to DNP official Yanyong Lekhawichit, several charity foundations have been supplying food to other animals that remain at the temple pending relocation. 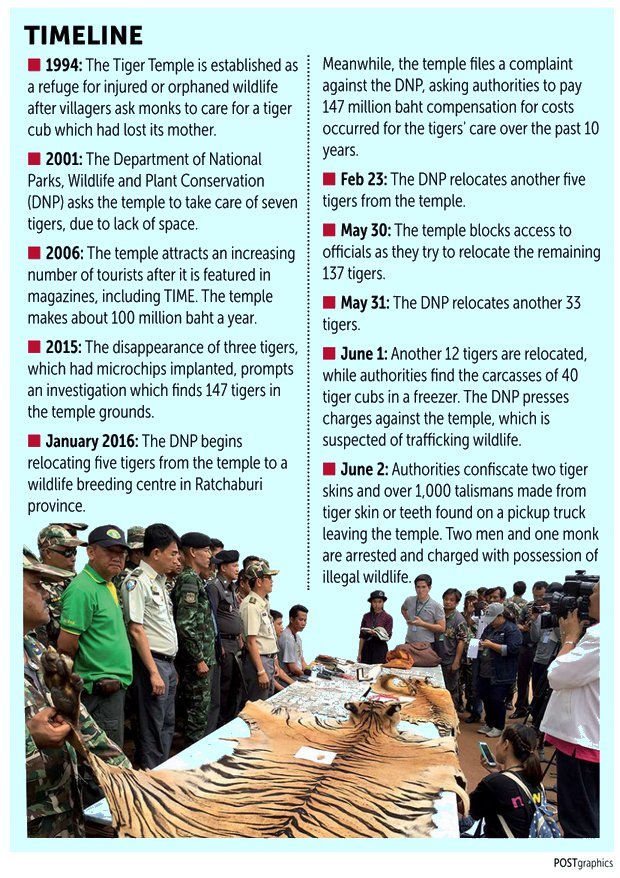