A teacher at an elite high school accused of having sex with underage boys has insisted the partners in video clips and pictures shared online were not minors.

Speaking at the Central Investigation Bureau on Saturday, Suankularb Wittayalai School teacher Sarot Meephai said nothing in the clips or images indicated his partners were under the age of 15 or school students.

The 33-year-old biology teacher said he met his partners online before meeting up with them in person. 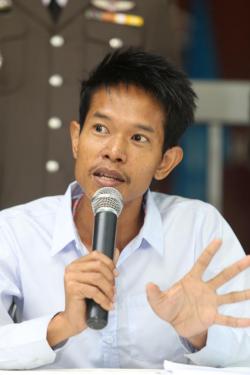 "When we got in there [online], we met people who wanted the same thing and they are all above 20 years old," Mr Sarot said. He also said he had never sexually abused any students from his school.

Suankularb Wittayalai is the country's oldest secondary school and one of the country's most prestigious for boys. It counts eight former prime ministers and four supreme commanders among its alumni, including statesmen Pridi Phanomyong and Gen Prem Tinsulanonda.

On Thursday, a message was posted on the Facebook page "Nakrian Suankularb" about an inappropriate act involving a schoolteacher.

Many clips of sexual acts involving the teacher and male students from several schools were posted on Twitter by a user named k @uhbbjhbj. The account was later found to belong to Mr Sarot. It has since been closed.

Referring to the pictures on his Twitter accounts, Mr Sarot said he sometimes shared his social media username and password and gave his mobile phones to people he liked on social media.

He said he was not responsible for the images and videos being posted online.

According to police, a certain number of video clips and photos with "what appeared to be sexual abuse" were found on Mr Sarot's mobile phone. Police from the Technology Crime Suppression Division are examining them.

Mr Sarot is facing charges of violation of Section 14 of the Computer Crime Act, which involves importing and sharing obscene content on a computer system.

CIB commissioner Thitirat Nongharnphithak said he had assigned TCSD commander Supaset Chokechai to investigate after the video clips and images were shared online. This led to the arrest of Mr Sarot at the Secondary Educational Service Area Office 1 on Friday evening.

Police yesterday took Mr Sarot to the Criminal Court to seek a 12-day detention to allow them time to interview seven witnesses and further examine evidence. Detention was granted and Mr Sarot was sent to Bangkok Remand Prison. Chaiyot Imsuwan, deputy permanent secretary for education, said the Teachers' Council of Thailand's Professional Ethics Committee would investigate Mr Sarot's case. If he is found to have breached the committee's ethics, Mr Sarot risks having his teaching licence revoked.