Registration due for PromptPay in July

The government is confident that the launch of e-payments system including PromptPay will help drive e-commerce and boost domestic trade and exports largely.PATTARAPONG CHATPATTARASILL

Electronic fund transfers under the national e-payment system will undercut the current fees charged by banks by offering free service for transactions not exceeding 5,000 baht.

Unlike the current system, PromptPay will not impose any charge when transferring money to different banks or to the same bank in a cross-clearing zone, said Tongurai Limpiti, the Bank of Thailand's deputy governor overseeing financial institution stability.

The fee structure will come into effect at the end of October.

Fund transfer fees are currently imposed based on the amount, channel and whether it is an interbank or cross-clearing zone transfer.

PromptPay will use citizens' ID card numbers and mobile phone numbers to link with a bank account, so cash transactions can be made easily. 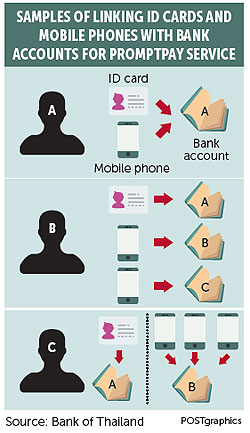 PromptPay will initially allow e-money transfers between people, while e-money transaction between companies will be the next phase, Mrs Tongurai said, noting that the government will be able to send pension and tax rebates to individuals in the future.

Fifteen commercial banks and four specialised financial institutions -- the Government Savings Bank, GH Bank, Islamic Bank of Thailand and the Bank for Agriculture and Agricultural Cooperatives -- have been tasked with PromptPay registration starting on July 15 nationwide, with no deadline set for registration, said Mrs Tongurai.

Registration can be made via ATM, internet banking, mobile banking or bank branches.

Some financial institutions will have a pre-registration period for PromptPay from July 1-14, she said.

Participants will have to designate their savings or current account as the primary account for e-money transfers. Such accounts can be wired with their ID card's 13 digits and mobile phone number.

It will also be possible to link only a single bank account with a person's ID card and three mobile phone numbers, but this will depend on how a particular bank is prepared to operate the service.

Fund transfers via PromptPay will start in late October and the next phase is aimed at e-payment for public utility services, said Thai Bankers' Association chairman and Kasikornbank president Predee Daochai.

One registered PromptPay account can be linked to four sets of numbers -- one ID and three mobile phone numbers -- and these numbers must not be linked with any other account, he said.

Eligible accounts include savings or current accounts with a single owner, he said.

In cases where users would like to change the bank with which they linked to the PromptPay service, they can rescind their registration and register with another bank. Changes of details to registered bank accounts or mobile phone numbers can also be made.

The new system is part of the government's e-payment initiative. It is estimated the e-payment system, which will transform Thailand into a cashless society, will help save costs of 70 billion baht a year in printing and transporting banknotes and cheques.

Permanent secretary for finance Somchai Sujjapongse recently said that e-payment would be available from January next year.

Electronic payments, of which 98% are made through credit cards and the remainder through debit cards, account for 19% of total transaction value.