The grounded Nok Air plane that made an emergency landing at Chumphon airport after the pilot reported cracks in the front-facing, port side cockpit window. (Photo by Amnat Thongdee)

A Bangkok-bound Nok Air flight made an emergency landing at Chumphon airport on Friday morning after the pilot reported cracks in the cockpit window.

Flight DD7313, with 62 passengers and four crew members, reported the problem shortly after taking off from Ranong airport for Bangkok at 7.55am on Friday.

The plane was scheduled to arrive at Don Mueang airport at 9.20am. 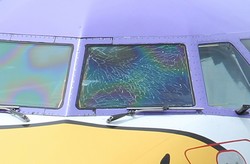 The cracked cockpit window on the Nok Air flight diverted to Chumphon.(Photo by Amnat Thongdee)

The flight was diverted to Chumphon airport, where it landed safely, the airline’s public relations section said.

Nok Air offered three options for passengers - transfer to another Nok Air flight scheduled to leave Chumphon for Bangkok at 8pm, a bus to take passengers to Bangkok, and refunds for passengers wanting to cancel the trip.

The airline is investigating the cause of cracks.