No street stalls at Siam Square, Ratchadamri from Aug 1

City Hall has set an Aug 1 deadline for all street vendors outside designated spots around Siam Square and Ratchadamri to move to new areas that have been set aside for them.

The city administration had prepared a new site  beneath Phong Phra Ram expressway for all 554 vendors who would be affected. They had until Aug 1 to relocate their stalls.

The new site, covering 7 rai and 46 square wah, could accommodate 620 vendors and 60 vehicles. The land is owned by the Expressway Authority of Thailand, Mr Witchapong said.

Currently, the BMA uses the area as a sports yard, a public park and a parking area for its garbage trucks.

The site's land use would be changed to accommodate vendors affected by the BMA’s decision to reclaim footpaths around Siam Square for pedestrians, he said during a meeting of BMA executive of Monday, Thairath Online reported.

The district office is in the process of improving the new vending area.

During the initial phase of trading, vending fees will not be collected. The BMA would ask the Interior Ministry to arrange this with the expressway authority.

City officials would explain the details at a meeting with all affected vendors on Wednesday afternoon at the Bangkok Art and Culture Centre.

Areas along the Airport Rail Link between the Ratchaprarop station and Phaya Thai station, covering about 4,900 square metres, have been set aside for vendors who are being forced to move. 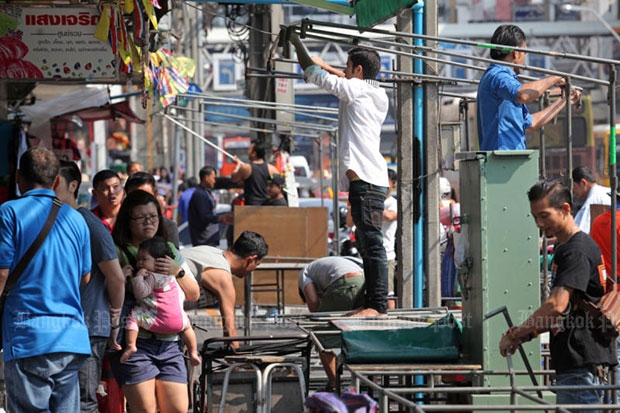