CHON BURI - A 62-year-old Swedish man was found dead with his head in a bucket of water and bruising on his body at a condominium room in Pattaya beach city in the early hours of Wednesday.

The dead man (whose name was withheld pending notification of relatives) was found in his room on the 10th floor of a condominium building in tambon Nong Phrue of Bang Lamung district, said Pol Lt Temtrong Rodsiri, a deputy investigation chief at Pattaya police station.

His death was reported about 12.30am.

Police and an emergency crew sent to the scene  found the Swede slumped in the bathroom with his head in a bucket of water and a golf bag across the back of his neck.

Police said there were bruises on his body. The man was believed to have died at least 5-6 hours before his body was discovered.

A handwritten letter was found on a desk near his bed.  The letter was held as evidence. Police refused to say what was in it.

Waewmanee Luengkrathok, 26, who alerted police, said the tourist came to her shop every night to have a few drinks. When he did not come to her shop on Tuesday night, she became worried.  She later went to the condominium and asked a security guard there to check his room.

They knocked on the door room several times, but nobody answered. A reserve key was later used to enter the room and they found his body in the bathroom.

The dead man was to be sent to the Police General Hospital’s Institute of Forensic Medicine for a post-mortem examination to find out the cause of  death. Police said they were investigating whether he was murdered or took his own life. 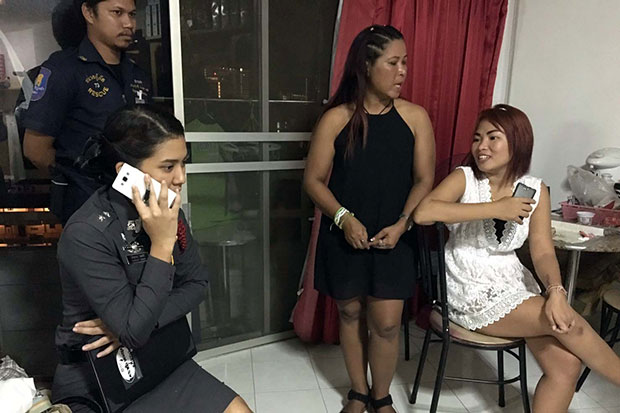 A policewoman reports to her superior after inspecting the room at a condominium in Pattaya of Chon Buri where the body of a Swedish man was found  in the early hours of Wednesday. (Photo by Chaiyot Puttanapong)

More than 1,000 garment workers who were sacked after their lingerie factory closed down last year will receive a total of US$8.3 million (about 282 million baht) in compensation.