10 policemen 'to blame' for expiry of Red Bull heir charge

Ten Thong Lor policemen handling the 2012 hit-and-run case involving Vorayudh "Boss" Yoovidhaya were involved in the failure to indict the Red Bull heir on a speeding charge before its one-year statute of limitations expired, an investigation has found.

The 10 officers included investigators and their superiors responsible for the case, said Pol Lt Gen Sanit Mahathavorn, acting chief of the Metropolitan Police Bureau. Some of them have reportedly been transferred elsewhere in regular reshuffles since the incident took place four years ago. 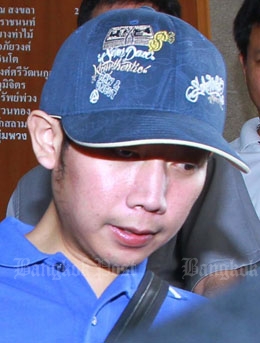 Pol Lt Gen Sanit did not reveal the officers’ names or give details about their mishandling in the case, saying conclusive findings had yet to be reached. He said his team would thoroughly review the investigation one more time before forwarding it to the National Anti-Corruption Commission (NACC).

The officers found to have mishandled the case will face disciplinary action, as well as criminal action if they are found guilty of malfeasance.

Mr Vorayudh was allegedly speeding a Ferrari that crashed into a traffic policeman's motorcycle, killing him on the spot, in the early hours of Sept 3, 2012.

Thong Lor officials initially charged Mr Vorayudh with reckless driving causing death and failing to stop his car to help a victim and forwarded the case to prosecutors.

However, it was sent back to the police as prosecutors also wanted to indict him for speeding after security camera footage showed he might have been driving at up to 170kph when the incident took place.

Mr Vorayudh, who is now 31, challenged the prosecution and his request for the police to question an additional six witnesses was granted by the Office of the Attorney-General. This caused a delay of almost six months in the indictment.

The inquiry led by Pol Lt Gen Sanit focused on why Mr Vorayudh could not be indicted before the one-year statute of limitations on his speeding charge expired on Sept 3, 2013. It also looked into the investigators’ decision not to charge Mr Vorayudh with drink-driving and whether they had deliberately stalled the case.

The preliminary investigation into the Thong Lor officers' conduct indicated several “flaws and irregularities” in their handling of the Red Bull heir’s case but no details have been released. Police were criticised for failing to seek a court order restraining Mr Vorayudh from leaving the country following his arrest and temporary release on bail of 500,000 baht after the crash

The youngest son of Red Bull energy drink executive Chalerm Yoovidhaya and grandson of the late founder Chaleo Yoovidhaya, Mr Vorayudh has failed to meet prosecutors to answer charges in connection with the deadly hit-and-run incident. He has reportedly fled the country. The charges of reckless driving causing death and failing to help a crash victim have a statute of limitations of 15 years and five years respectively.

A speeding offence carries a penalty of a fine up to 1,000 baht.