King Power has a state monopoly on duty-free sales at all international airports in Thailand, with shops also in major cities where people can buy goods ahead of departure.

The Supreme Court on Wednesday acquitted TV host Chirmsak Pinthong of a defamation lawsuit brought by King Power Duty Free over an episode implicating the company in illegal sales of duty free goods.

The suit related to an episode on smuggled goods on Mr Chirmsak's "Long Euy Yang Rai" talk programme on Channel 11 on Feb 10, 2010. The company accused Mr Chirmsak, who is a former senator, of saying the duty-free monopoly sold goods to people who were not leaving or arriving in the country. 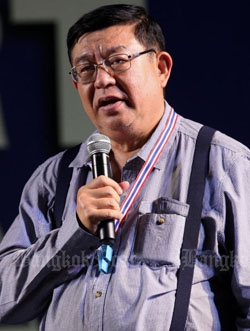 On Sept 26, 2013, the Criminal Court acquitted him, ruling  there was a video showing the delivery of liquor, wine and champagne packaged by the duty-free retailer to a house, and the buyer there did not have to show a passport or an air ticket for the purchase.

The company appealed and the Appeals Court on May 9 last year upheld the acquittal, stating Mr Chirmsak had made an honest criticism.

In its ruling, read at the Criminal Court in Bangkok on Wednesday, the Supreme Court said Mr Chirmsak raised the issue honestly to protect the interests of the state as he was a director of Airports of Thailand Plc at that time.

King Power Duty Free has a monopoly on duty-free shops at airports throughout the country.