Rescue workers salvage the submerged van that carried four British tourists and their tour guide after the accident in Rayong province on Wednesday. (Photo by Jumphon Nikhomrak)

RAYONG - A Thai tour guide died and four members of a British family were slightly injured after their passenger van crashed on a canal bridge and plunged into the water on Wednesday.

A Bangkok-registered Toyota Commuter driven by Arkom Kumkainam, 47, was carrying four British tourists and a woman tour guide, Kanokrat Chaicharoensawat, 44, when it skidded off the road, fell from the bridge and plummeted into the canal below.

Kanokrat, a Bangkok native, was found dead in the front seat when rescue workers arrived at the scene. Mr Arkom was badly hurt when he was rescued from the water and sent to Sri Rayong hospital. The four tourists — Richard Dixon, 54, his wife Carla, 41, daughter Sara, 18, and six-year-old son Elliott — were taken to Rayong hospital for treatment of minor injuries.

The cause of the accident is not known yet. Police later took Mr Dixon to Muang Rayong police station to try to find out more about the incident. The van was taking the visitors from Samet Island to Bangkok. 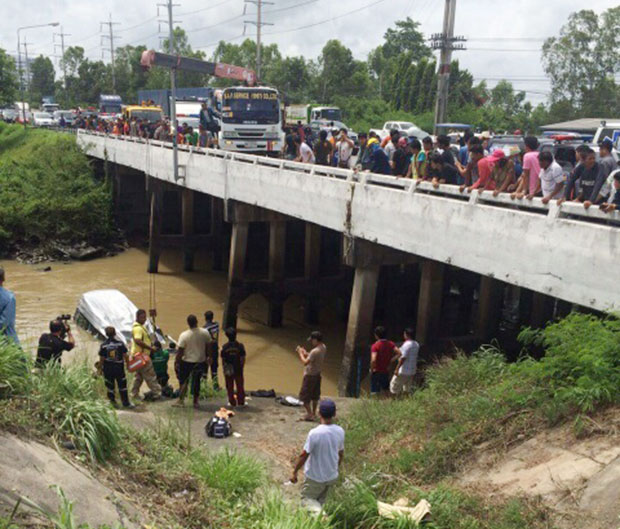