The wreckage of the Bangkok-bound interprovincial bus remains on the side of the road on Friday morning after it ran into a loaded 10-wheel truck in Sikhiu district of Nakhon Ratchasima overnight. The bus driver and five passengers were killed, as was the truck driver. (Photo by Prasit Tangprasert)

NAKHON RATCHASIMA - Six people were killed and 44 others hurt, 12 seriously, when a Bangkok-bound interprovincial bus ran through a road divider and crashed head-on into a 10-wheel truck in Sikhiu district in the early hours of Friday.

Police said the driver of the double-decker bus, carrying about 60 passengers from Roi Et’s Phanom Phrai district to Bangkok, apparently lost control. The bus crashed through the road divider and into the path of the oncoming fully loaded truck.

Police said it was raining heavily at the time. The driver might have fallen asleep at the wheel .

Police said 12 of the injured passengers were in serious condition and were admitted to Maharat Nakhon Ratchasima Hospital, while  28 were  treated and later released from Sikhiu Hospital. Another four remained at the hospital.

Pol Col Chalermsak Suksamran, chief of Sikhiu police, said the cause of the accident was still being investigated. More witnesses would be questioned. 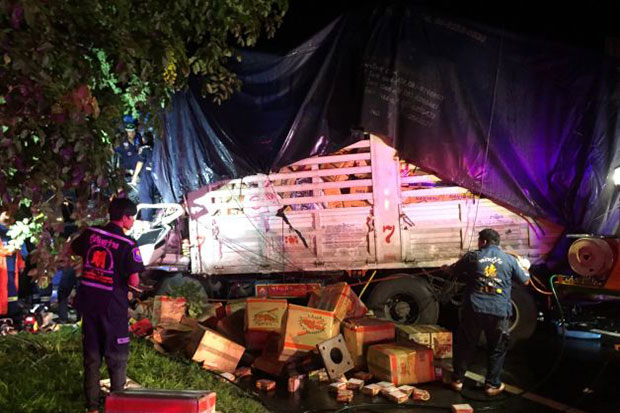 Rescue workers try to retrieve the body of the truck driver from the wreckage of the vehicle following the fatal crash. (Photo taken from Huk 91 Jud Sikhiu rescue team) 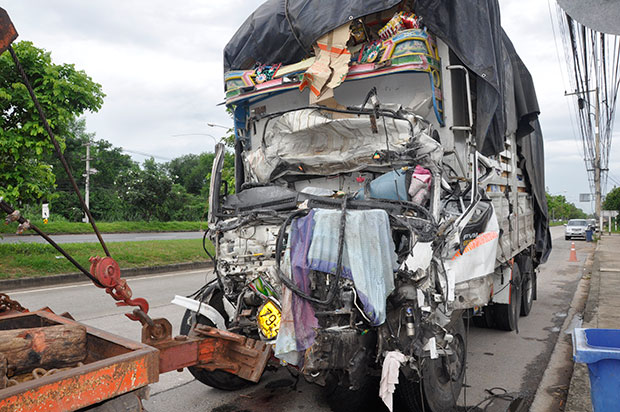 The wreckage of the 10-wheel truck is towed from the crash scene in Sikhiu district of Nakhon Ratchasima. The truck driver was among six people killed in the crash with a Bangkok-bound interprovincial bus. (Photo by Prasit Tangprasert)