Concertina rolls of razor wire prevent access to Wat Phra Dhammakaya in late May, as the abbot's row with the DSI intensifies. (Photo by Pattanapong Hirunard)

They have also obtained arrest warrants for 19 people on charges of obstructing DSI officials trying to arrest him on June 16.

Pol Col Khemaphat Phophithak, chief of Pathum Thani's Khlong Luang police station, told the press on Friday that the case against the abbot concerned the installation of concertina razor wire around the perimeter of Wat Phra Dhammakaya. He said this kind of wire was defined as being military hardware. 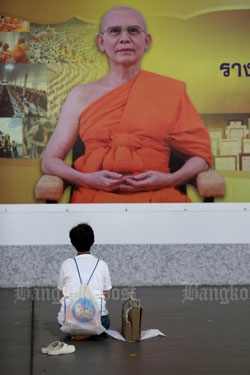 The long rolls of wire were put in late May and finally removed in mid-June. At the time DSI officers were trying to arrest the abbot for alleged money laundering and receiving stolen property in relation to multi-billion-baht embezzlement at Klongchan Credit Union Cooperative.

The 72-year-old abbot and people connected with the temple received moe than a billion baht of the cooperative's purloined money.

The military wire indictment also includes Phra Somnuek Piyathammo of Wat Phra Dhammakaya and the contractors who installed it, Pichai Laosirimongkhol and Wallop Kanhasen. The contractors have already reported to police.

Pol Col Khemaphat also said police had obtained arrest warrants for nine people on charges of obstructing DSI officers attempting to arrest Phra Dhammajayo on June 16. One of them was identified as Ms Jeerapha Rairod.

The warrants were approved by Pathum Thani Court on Thursday.

The 19 were among thousands of people sitting in the grounds "meditating", thereby blocking access to the temple building and Phra Dhammajayo.

The Khlong Luang police chief said many people who rallied at the temple on June 16 covered their faces, concealing their identity, in violation of the law on legal demonstrations. 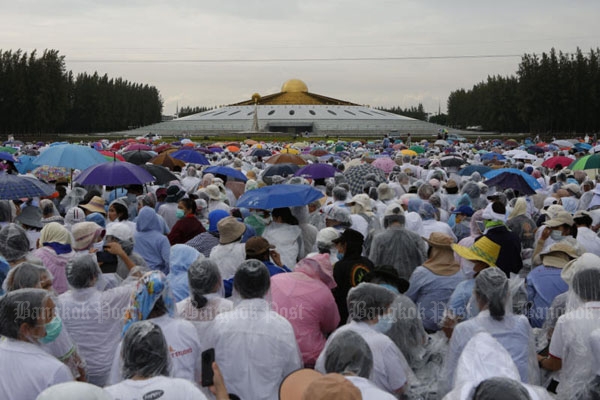