Police block a road near Patong Beach in Phuket following a bombing incident on Friday. (Photo by Achadtaya Chuenniran)

Two bombs exploded on Friday on Patong beach in Phuket, injuring one person, and a third was disabled, while another two devices blew up in Phangnga.

In Phuket, a bomb exploded at a police booth at the end of Walking Street Road in Thawiwong Road in Patong district. A motorcycle taxi driver was slightly injured. A second device exploded at Loma Beach on the same road, but caused no injuries.

The two bombs were set off by timers, police said.

Bomb disposal officers were able to defuse a third device.

Jamroen Tipyapongtada, the Phuket governor, said the province had given priority to the safety of the public and tourists and was seeking cooperation from local authorities and villages to assist in watching for suspicious objects. 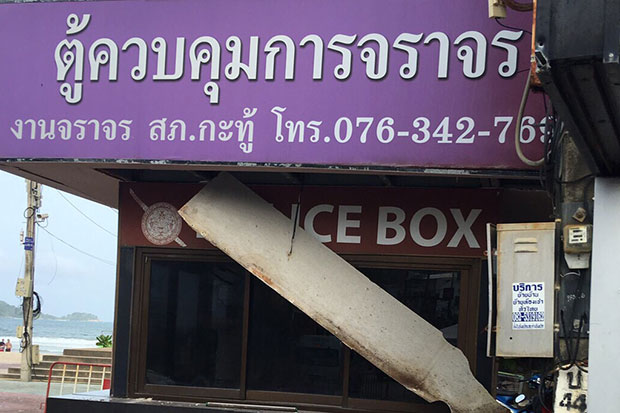 A damaged police booth is seen after the bombing in Patong. (Photo by Achadtaya Chuenniran)

The bombs went off at two locations at Ban Nang Niang village in tambon Khuek Khak. One vehicle was damaged.

The blasts followed a fire that gutted a weekend market at the same tambon in the early hours of Friday. The cause of that fire is under investigation, and could have been a bomb.

The fire occurred at about 2.15am at the market, a popular shopping venue among tourists in Khao Lak.

Two fire trucks and firemen were deployed to the fire-gutted market in tambon Khuek Khak. Firefighters took more than one hour to douse the flames, which damaged 80 stalls. Damage was estimated at about 8 million baht.

The investigation of the fire's cause was continuing. Police said it could have been an electrical short circuit or arson by a bomb.

Pol Lt Col Athiwat Chaisrisut, deputy suppression chief of Ao Nang police station, deputy Krabi governor Sirichai Sriniang and senior officials rushed to the scene after being reported at around 3.15am on Friday.

Fire trucks were sent to the scene in tambon Ao Nang in Muang district and firemen took almost thrtee hours to control the flames, which destroyed five shops. Nobody was injured.